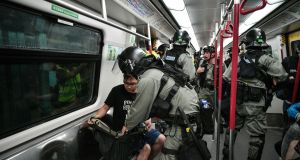 Hong Kong police have launched a wave of arrests against prominent democracy activists, marking a new phase in government efforts to stop mass protests that have plunged the city into months of political crisis.

On Friday, police detained pro-democracy lawmakers and activists, including Joshua Wong and Agnes Chow, student leaders of pro-democracy protests in 2014. The pair were charged with unlawful assembly and released on bail. Police said 28 people were arrested.

Critics say the mass arrests on the eve of a big rally planned for Saturday were aimed at dissuading protesters who have come out on to the streets for the past 12 weekends, demanding the withdrawal of a controversial extradition Bill among other demands.

“This is part and parcel of a new round of oppression against the movement,” said Kenneth Chan, a professor in the department of government at Hong Kong Baptist University. “The arrest of other known leaders is meant to intimidate others,” he said.

After almost three months of protests the Hong Kong government, backed by Beijing, appears to be escalating its tactics against the protesters, who have shown few signs of backing down. Beijing has reportedly ordered Hong Kong’s leader, chief executive Carrie Lam, not to concede to any of the protesters’ demands.

In recent weeks, Lam has hinted that her government could implement a colonial-era law, the Emergency Regulations Ordinance, that would give her sweeping powers to enforce anything from curfews and censorship to an internet shutdown in order to restore public order.

“They have run out of options, given they don’t want to give concessions. So they try any way they can think of including arrest and emergency laws,” said Lo Kin-hei, vice-chair of the Democratic party.

The protests, triggered in June by a proposed Bill that would allow suspects to be sent to mainland China, have evolved into a broader democracy movement challenging Beijing’s authority over the city.

China’s warnings towards Hong Kong have grown increasingly ominous and the Chinese military has held several rounds of exercises across the border from Hong Kong. But experts say military intervention is Beijing’s last option, choosing instead to rely on the Hong Kong authorities to stop the protests.

“We are in a stage where Beijing is increasingly trying to impose costs. It’s fairly clear Beijing has decided to adopt a hardline tactic, using the Hong Kong police, encouraging tougher tactics against protesters, and prosecuting them,” said Adam Ni, who researches China at Macquarie University in Australia.

Observers say both the Chinese and Hong Kong authorities are anxious to end the demonstrations before October 1st, when China celebrates 70 years of the founding of the People’s Republic of China, a politically significant holiday for the ruling Chinese communist party.

The movement has been largely leaderless – in part to prevent the authorities from targeting particular individuals. Wong and Chow, now of the pro-democracy political organisation Demosisto, have been active in the protests but neither are considered key figures.

Andy Chan, head of a pro-independence party that was banned last year after the authorities deemed it an “imminent threat” to national security, was detained on Thursday night at Hong Kong airport.

“They are symbols of what the protesters are fighting for. It’s a very visible signal to the protesters that there will be a cost for you, that we will keep arresting these people who continue to protest and resist,” said Ni.

Vocal democracy advocates are bracing for more arrests in the days to come. Fernando Cheung, a pro-democracy lawmaker who has been active in the demonstrations, posted on Facebook on Friday evening to alert friends that he had not been arrested. “Thank you for your concern, see you tomorrow on Hong Kong island!” he said, suggesting he would be at the protests on Saturday.

Activists publicly involved in the protests have in some cases been physically attacked. On Thursday, Jimmy Sham, the convener of the Civil Human Rights Front – the group organising the march – was attacked inside a restaurant by two masked men wielding baseball bats and knives. Another protester, Max Chung, who organised a march in Yuen Long last month, was beaten by four men wielding rods.

The organisers of Saturday’s march, which police had banned, called off the event on Friday fearing mass arrests, but groups of defiant protesters have called for people to come out anyway.

“Hongkongers are not afraid. More suppression just leads to more opposition,” one user commented on a protest forum. Another wrote: “Even if they bring the tanks out, I will be there.”

Some fear the authorities intend to provoke protesters, creating more public anger and chaos on the streets, as a way to justify enacting the emergency law – a move that would severely damage Hong Kong’s reputation as a global business and finance hub.

“The authorities, Carrie Lam in particular, definitely understand that this whole thing could backfire. They could actually be adding more fuel to the fire, and more people will come out,” said Claudia Mo, a pro-democracy lawmaker. “They can’t lose. It’s very calculated on their part,” she said.

Saturday’s rally was meant to mark five years since Beijing’s proposal for direct elections in Hong Kong, which would only allow candidates screened by Beijing. That proposal sparked mass protests known as the umbrella movement. Many of those in this summer’s demonstrations attended the 2014 protests as young students.

Demonstrators planned to gather for a religious rally on Saturday, which requires police approval if more than 30 people attend. University and secondary students have called for a class boycott next week. Demonstrators have also called for a citywide strike on Monday and Tuesday.

“I urge the international community to send a clear message to President Xi Jinping: sending troops or using an emergency ordinance is not the way out. We will continue our fight no matter how they arrest or prosecute us.”

1 Eating out in Dublin – the homeless way
2 Irish Times poll: Large majority want change of government
3 Miriam Lord: Greens take to the beach as signs emerge of a rising tide
4 Which jobs do teenage girls and boys aspire to have by age 30?
5 Some 45,000 taken off waiting lists last year without seeing medical specialist
Real news has value SUBSCRIBE