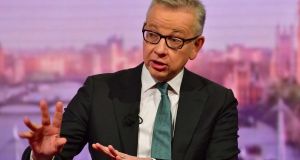 British cabinet heavyweight Michael Gove has refused to confirm the government would abide by legislation blocking a no-deal Brexit if it is forced through by Tory rebels and the opposition this week.

The Chancellor of the Duchy of Lancaster also said some food prices in Britain would increase in the event of the UK’s withdrawal from the EU without an agreement with Brussels.

Pressed repeatedly on whether the government would abide by a successful bid by Commons opponents to pass legislation preventing a no-deal withdrawal on October 31st, Mr Gove told BBC One’s The Andrew Marr Show: “Let’s see what the legislation says.

“You’re asking me about a pig in a poke.

“And I will wait to see what legislation the opposition may try to bring forward.”

Mr Gove added: “For me, the most important thing is to bear in mind actually, we already have legislation in place which an overwhelming majority of MPs voted for.

The comments come ahead of another pivotal week in the Commons and an expected clash when opponents of no deal look set to try to seize control of the parliamentary agenda to push through legislation delaying Brexit beyond October 31st.

He tweeted: “For ministers not to confirm that this government will accept and comply with legislation lawfully passed is breathtaking.

“The prime minister must make a statement on this straight away.

“No government is above the law.”

Mr Gauke told Sky News: “I want to hear from him as to what is his plan to deliver a deal.

“When are we putting forward proposals to deal with this backstop issue?

“And I want to hear how he plans to deliver the legislation if we get a deal by October 31st, because at the moment, frankly, I can’t see how he’s got time to do that.”

Referring to reports that Tories who oppose a no-deal option could lose the party whip, Mr Gauke said: “Sometimes there is a point where... you have to judge between your own personal interests and the national interest.

“And the national interest has to come first.

Pressed on whether there would be shortages of fresh food as a result of a no-deal Brexit, Mr Gove said: “Everyone will have the food they need.”

He added: “No, there will be no shortages of fresh food.”

Asked if food prices would increase, Mr Gove said: “I think that there are a number of economic factors in play. “Some prices may go up. Other prices will come down.”

Asked if he planned to try to force through a Brexit extension beyond October 31st, Mr Gauke said: “I think the detail will become very apparent in the next few days.

“But I think the important thing is that Parliament should not be excluded from this process.

“I don’t believe that no deal has a mandate from the 2016 referendum. I don’t think it has got the support of Parliament.

“And the problem is that if we don’t act in this week, I think that it is likely that Parliament will be excluded from this process.”

International development secretary Alok Sharma told Tory rebels to be “clear whose side you are on”.

In a warning to Conservative colleagues who are considering joining opposition attempts to pass legislation to block a no-deal Brexit, Mr Sharma said they need to “stand with the people” and deliver Brexit.

Speaking to Sky News, Mr Sharma said: “You need to be very clear whose side you are on.”

Shadow chancellor John McDonnell said the prime minister and government are “insulting the intelligence of the British people” in their explanation for suspending Parliament for up to five weeks until mid-October.

“Just because a prime minister is worried that they’ll lose a vote in Parliament, to then use the tactic of closing down parliament, in our parliamentary democracy, is unacceptable,” he said.

Mr McDonnell described the prime minister as being “like a dictator”.

Sir Keir said Jeremy Corbyn should be given a chance to form a government if the prime minister lost a confidence vote.

He added: “It is quite right that as leader of the opposition, Jeremy Corbyn should try and form a government.”

Asked what would happen if Mr Corbyn could not command a majority in the Commons, Sir Keir added: “If he can’t, we will address that when we get there.” - PA