Suspect charged over rape and murder of Bulgarian journalist 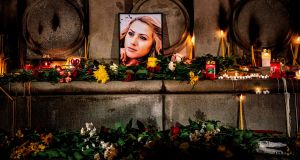 A portrait of murdered Bulgarian television journalist Viktoria Marinova during a candlelit vigil in the city of Ruse. Photograph: Dimitar Dilkoff/AFP/Getty Images

German police have arrested a suspect in the rape and murder of Bulgarian journalist Viktoria Marinova, as officials in her homeland played down suspicions that she was targeted because of her profession and a recent report on a major corruption case.

Severin Krasimirov (20) was detained late on Tuesday night in the city of Stade in Lower Saxony and charged over the attack on Ms Marinova (30), who was found dead in her hometown of Ruse on the Bulgaria-Romania border last Saturday.

The killing fuelled renewed concern for the safety of journalists in EU member states, following the murders of Daphne Caruana Galizia in Malta last October and Slovak Jan Kuciak in February, when he was shot dead beside his fiancee.

Ms Marinova’s last television programme covered an investigation into suspected fraud involving EU funds but – unlike Caruana Galizia and Kuciak – she was not known as a reporter who dug into corruption cases.

Police suspect Mr Krasimirov attacked Ms Marinova as she jogged beside the Danube river in Ruse on Saturday and that he raped, beat and strangled her. He is believed to have crossed the border into Romania the following day and then made his way to Germany, where he has relatives.

Bulgarian interior minister Mladen Marinov said on Wednesday that Mr Krasimirov’s DNA matched samples recovered at the crime scene, and added that there was “no apparent link” between the crime and Mr Marinova’s work.

The country’s prime minister, Boiko Borisov, insisted that reporters in Bulgaria had “total freedom to write and report on any topic”.

Top EU officials and international press freedom watchdogs urged Bulgaria this week to do its utmost to find Ms Marinova’s killer, and several implied that her murder was linked to the organised crime and corruption that blight the nation.

European Commission president Jean-Claude Juncker on Wednesday praised “the swift and intensive efforts by Prime Minister Borisov and the Bulgarian authorities who in close co-operation with law enforcement agencies from other EU member states successfully arrested the suspected murderer”.

Ms Marinova’s ex-husband Svilen Maksimov told Bulgarian television: “I hope that the state and people respond in the same way to any other occasion when a human being is in danger. When this happens, we can call ourselves ‘a state’.”

According to the Balkan Insight news service, he said “it looks like it is not a professional murder, which gives me a bit of comfort” and that “all the evidence points towards an absurd, awful coincidence”.

Bulgarians who have held vigils for Ms Marinova in the capital Sofia, Ruse and other towns and cities, lamented the failure of successive governments to tackle rampant graft and mafia power in a country that joined the EU in 2007, and said they would not allow the authorities to stage a cover-up in this case.