Teacher accused of sex with pupil on plane may face retrial 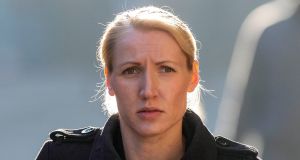 A teacher accused of having sex with a student in the toilet of a plane as they returned from a school trip could face a retrial after a jury failed to reach a verdict in the case.

The panel of four men and six women was discharged after deliberating for 10½ hours over three days in the trial of Eleanor Wilson at Bristol Crown Court.

Judge Peter Blair stopped the trial after the foreman informed him there was not a “realistic prospect” of reaching majority verdicts on any of the four charges of sexual activity with a child by a person in a position of trust that Ms Wilson faced.

Mr Justice Blair told the panel: “I am going to discharge you now from returning verdicts on this indictment, but can I extend my grateful thanks to you on behalf of the court service for all the work you have been doing for the last three-and-a-half weeks.

“This happens from time to time.

“It is part of the system and you shouldn’t in any way beat yourselves up about it.”

Virginia Cornwall, prosecuting, asked for seven days for the Crown Prosecution Service to consider whether it wished to seek a retrial.

Ms Wilson (29) was on trial accused of having drink-fuelled sexual intercourse with the teenager on a British Airways flight home from an overseas camping trip in August 2015.

It is alleged the teacher, then aged 26, kissed and cuddled the boy before “beckoning” him into a toilet on the plane, where they allegedly had sex, before returning to their seats.

She is also accused of seeing the boy outside of school, where they allegedly kissed and cuddled on three separate occasions – after a meal at Nando’s and trips to Tintern Abbey and Ashton Court.

Within weeks of the pair returning from the trip, rumours had spread across the school that Ms Wilson was in a relationship with a student, but when confronted by the head teacher she denied this, saying she was “horrified” at the accusation.

At the same time, Ms Wilson discovered she was pregnant and went on to have an abortion. Prosecutors claimed the boy was the father.

The court heard their “clandestine” relationship was fully exposed months later when another pupil at the school tried to blackmail Ms Wilson into having sex with him.

Ms Wilson said she formed a friendship with the boy because she had no friends of her own age who she could confide in.

Ms Wilson told the court the boy had imagined the incident in the toilet and also denied holding his hand and kissing him during time alone, insisting there was “no truth whatsoever” in the allegations.

She also accused her then partner Andrew Hall of being violent and controlling and not being ready to start a family with her.

The teenager, who bought Ms Wilson flowers and chocolates, told the jury a bond developed between him and Ms Wilson and insisted his account was not fantasy and that he was telling the truth.

Mr Hall described his relationship with Ms Wilson as “dysfunctional” but denied that he was “controlling”, “jealous”, “aggressive” and “physical” towards her.