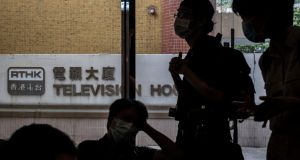 Hong Kong’s police have arrested a journalist who reported on allegations that law enforcement failed to protect civilians from a group of thugs, in a move set to spread fear through the territory’s press.

The police action targeting a producer from public broadcaster Radio Television Hong Kong (RTHK) follows the arrest earlier in the week of eight pro-democracy politicians for obstructing a legislative council meeting in May.

Authorities have been stepping up their crackdown on opposition political figures and supporters of the 2019 anti-government protests since Beijing introduced a new national security law in the city in June, targeting terrorism, subversion, collusion and foreign interference.

While the arrests were made under existing laws, analysts say the rise in scrutiny of the media, academics and activists further chips away at the freedoms promised to the territory following the UK’s handover of the city to China in 1997.

Pro-democracy politician Claudia Mo said the move was designed to scare the local press. “The message is: watch out, we’ll do just anything to get you if you’re found [to be] politically incorrect.”

Police arrested Bao Choy, a 37-year-old producer for RTHK, on accusations that she made “false statements” when accessing a public database of vehicle licence plate information. The allegation centred on the reason she selected for accessing the database, which allegedly did not reflect why she was using it.

Ms Choy had worked on an investigative documentary examining the police response to a July violent attack by a mob of men, in which the officers arrived too late to protect pro-democracy protesters from getting beaten.

The arrest was made following a complaint from the public, according to the police, but the Hong Kong Journalists Association said journalists routinely used public databases and that the arrest was an attack on press freedom.

RTHK chief Leung Ka-wing said that while the station would not halt investigative projects, staff were shocked by the arrest. “We are afraid, we are worried, whether we can continue the way we produce high-quality news as before,” he said.

On Sunday morning, police detained seven pro-democracy politicians over accusations they violated laws which govern conduct in the territory’s legislative council during a chaotic tussle in May. Another politician was arrested on Monday in relation to the same incident.

As has been previously reported, journalists at Hong Kong’s public broadcaster have been told to tone down their coverage of the city’s independence movement.