China Cables: The surveillance system behind the repression 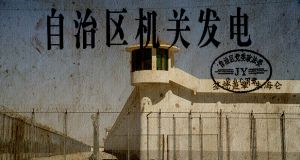 The unprecedented campaign of repression being conducted by the Chinese government in Xinjiang involves the use of its international diplomatic network, leaked Chinese Communist Party documents show.

Natives of Xinjiang who are members of ethnic minority groups and who have become naturalised citizens of countries such as the UK, Canada, Finland and the US, and who apply for visas to visit China, are being targeted for arrest.

The Chinese government has put in place a massive data operation to monitor and conduct “predictive policing” on the mostly-Muslim ethnic population of Xinjiang, a huge sparsely-populated region far from Beijing.

A number of highly-classified documents issued by one of the top officials involved in overseeing the campaign of mass repression have been leaked to the International Consortium of Investigative Journalists (ICIJ), which has shared them with 17 media partners, including The Irish Times.

The bulletins, part of the China Cables, were issued by top Communist Party security official, Zhu Hailun, to the secretaries of local party security committees across the vast, sparsely-populated region of North-West China.

Car registration information, police reports, CCTV facial recognition technology, and a host of other sources (including questionnaires carried out in people’s homes), flow into the surveillance system and are used to monitor the population.

The Chinese government says the system is designed to combat Islamic terrorism in a region where half of the population are members of the Uighur or other Turkic ethnic groups, many of whom do not speak Mandarin, and the majority of whom are Muslim.

For those identified by the screening who were still outside China and for whom “suspected terrorism cannot be ruled out”, they should be “arrested the moment they cross the border”

The bulletins make clear that China’s international diplomatic network is part of the surveillance operation, which was rolled out during late 2016 and early 2017.

In a bulletin on “cracking down and assaulting on the front lines”, written in June, 2017, Zhu noted that recent screening had found that 4,341 people from Xinjiang had obtained documents from Chinese embassies and consulates abroad. All prefectures, he said, should fully draw on local intelligence structures to fully analyse these people.

For those identified by the screening who were still outside China and for whom “suspected terrorism cannot be ruled out”, they should be “arrested the moment they cross the border”.

Initial inquiries indicated that 75 of the people identified were in China, Zhu said. “Of the 75 people, 26 are Turkish, 23 are Australian, three are American, five are Swedish, two from New Zealand, one from the Netherlands, three from Uzbekistan, two from the United Kingdom, five are Canadian, three are Finnish, one is French, and one is from Kyrgyzstan,” he said.

Education and training is a reference to a vast network of indoctrination camps that the Chinese government has constructed across Xinjiang. Foreign observers believe more than one million people from majority-Muslim ethnic groups are being held in the camps.

The June 15th bulletin notes that, of 4,341 people that the surveillance system has flagged, 607 had secured documents from the Chinese diplomatic mission in Turkey, one of the closest missions to where Islamic State were then fighting.

The Chinese government has said its massive “Strike Hard” operation in Xinjiang is aimed at fighting terrorism and nipping extremism “in the bud”.

“In the future, apart from those verified by public security organs, for any person originally from Xinjiang who obtains foreign nationality or a foreign passport, [who] applies for a visa at our Chinese embassies or consulates abroad, or for any Xinjiang people who apply for replacements of valid documents at our Chinese embassies or consulates abroad, the local party” security structures should investigate. And “for those whom suspected terrorism cannot be ruled out, border control should be implemented to carry out arrest or to refuse approval”.

There is no mention of the Chinese embassy in Dublin in the bulletin. There are only a small number of Uighur people understood to be living in Ireland. Attempts over recent weeks by The Irish Times to speak with a member of the community, even off the record, met with no success. A number of intermediaries said they were too afraid of potential consequences.

Another leaked bulletin, a week later and also by Zhu, noted that by taking a number of steps, including the removal of “harmful software” and the “strengthening of strict measures”, the party has managed to effectively curb the momentum of domestic and foreign communication in Xinjiang.

Another leaked bulletin, this one dated June 25th, 2017, noted that the surveillance system had, during the preceding six days, flagged to the authorities in four states in southern Xinjiang of 24,412 “suspicious” persons.

Following verification work, 706 of these people had been criminally detained, and 15,683 had been sent to education and training centres. A further 2,096 were put under preventative surveillance and 5,508 were “temporarily unable to be detained”.

The figures show that almost everyone who was identified as being possibly suspicious by the algorithms used in the surveillance system was deemed to be worthy of detention or internment, with the rest being selected for even closer surveillance.

A bulletin dated June 29th, 2017, was concerned with the use in Xinjiang of the Kuai Ya, or Zapya, file-sharing app. The app allows people in countries or regions with low internet penetration to transfer and share files, including music and video files, using a wi-fi hotspot to which other devices can connect, making a local network.

The Chinese authorities fear that it can be used by people in Xinjiang to swap material about terrorism but also about their Islamic faith or their views about the Beijing government and the Chinese Communist Party.

An analysis of the surveillance system found 1,869,100 Uighur users of Zapya in Xinjiang during the period from July 7th, 2016, to the date of the bulletin, Zhu noted.

Some of these users had relations with “unauthorised imams”, while others were associated with people who had left the country and not returned for a long time, he noted. Thirty-two had “joined terrorist organisations such as the East Turkestan Islamic Movement”.