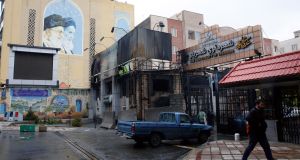 A man passes a building burnt-out during protests over increasing fuel prices in the city of Shahriar, Iran. Photograph: Abedin Taherkenareh/EPA 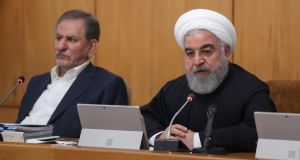 Iranian president Hassan Rouhani: “The spontaneous [pro-government] demonstrations which you see are the greatest sign of the power of the Iranian people,” he said. Photograph: Official President website/Handout via Reuters

Iranian president Hassan Rouhani on Wednesday claimed victory over unrest he blamed on foreign enemies, according to state media, after protests over fuel price rises rocked the nation and left scores reported dead.

“The Iranian people have again succeeded in an historic test and shown they will not let enemies benefit from the situation, even though they might have complaints about the country’s management,” Mr Rouhani said in remarks carried by state broadcaster IRIB on its website.

State television showed rallies in Rasht, Gorgan and Ardabil in the north, Hamadan in the west, and Shahryar, south of the capital Tehran, where a member of the security forces was also killed in the turmoil.

“The spontaneous [pro-government] demonstrations which you see are the greatest sign of the power of the Iranian people,” Mr Rouhani added.

Iran has blamed “thugs” linked to exiles and foreign enemies – the United States, Israel and Saudi Arabia – for the protests. The unrest began on Friday after gasoline prices were raised at least 50 per cent and rationing imposed.

Supreme leader Ayatollah Ali Khamenei said on Tuesday the protests had been a security matter, not a popular movement, and had been dealt with successfully.

Government spokesman Ali Rabiei said a plot to bomb Iran’s major gas production installations in Assalouyeh on the Gulf had been thwarted, blaming it on protesters, the semi-official news agency Mehr reported.

Iran has restricted access to the internet, making it nearly impossible for protesters to post social media videos of demonstrations.

About 1,000 protesters have been arrested, officials said.

The UN human rights office said it had received reports that dozens of people had been killed. It urged authorities to rein in its use of force to disperse protests.

Frustration has grown over a weakening currency and rising prices for bread, rice and other staples since the United States withdrew from Iran’s 2015 nuclear agreement and re-imposed sanctions.

The government said the price rises were intended to raise around $2.55 billion (€2.3 billion) a year for extra subsidies to 18 million families struggling on low incomes. – Reuters