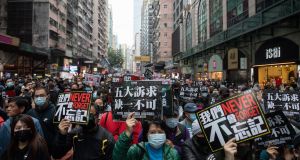 Hong Kong’s government has announced electoral changes requiring office-holders to pledge and maintain an oath of loyalty to Hong Kong and Beijing, or face disqualification and a five-year ban on running for re-election.

A Bill to “ensure patriots govern Hong Kong” has been endorsed by the chief executive council and will be tabled in March, the secretary for constitutional and mainland affairs, Erick Tsang, told a press conference on Tuesday afternoon.

“If you claim to be patriotic and you don’t respect, or you try to sabotage, the basic characteristics of our system – a system led by the [People’s Republic of China] – that would not be acceptable,” Mr Tsang said. “You can’t say: ‘I’m patriotic but I don’t respect that it’s the Chinese Communist party which leads the country’.”

The announcement came a day after a top Beijing official signalled that major changes would be coming to ensure Hong Kong is run by “patriots” – a clear sign that China intends to no longer tolerate dissenting voices, 23 years after the former British colony was handed over to Chinese rule with a promise it could maintain its own rights and freedoms for 50 years.

Following China’s imposition of a sweeping national security law on the city last year, authorities have moved to expel members of the city’s legislative council deemed insufficiently loyal and rounded up veteran opposition leaders on charges including illegal assembly and colluding with foreign forces.

Government critics and western governments accuse Beijing of going back on its word and effectively ending the “one country, two systems” framework for governing the financial hub.

The Bill allows for the rules to be applied retrospectively and extends oath-taking requirements to district councillors – local politicians who, since elections in late 2019, are overwhelmingly pro-democratic. Under the amendments they must pledge allegiance to Hong Kong as a special administrative region of China, and the city’s mini-constitution, the Basic Law.

Anyone found to have breached the oath could be suspended pending a court hearing and potential disqualification. If disqualified, the individual could not run again for five years, a time period that could block candidates from two election cycles, which are every four years.

Anyone advocating for or supporting Hong Kong independence, or who refuses to recognise the sovereignty of China over Hong Kong or the exercise of such sovereignty, could be disqualified under the proposed amendments, Mr Tsang said.

The reforms were flagged in a speech by the head of the Hong Kong and Macao Affairs Office, Xia Baolong, this week, which suggested Beijing was working on ensuring opposition candidates weren’t able to stand in Hong Kong’s already very limited elections.

Mr Xia outlined plans led by the central government to “improve” the electoral system in Hong Kong, and said authorities had to “close loopholes” which allowed “anti-China troublemakers” into politics.

Joshua Rosenzweig, the head of Amnesty International’s China team, said the Bill appeared to be another example of attempts by authorities to “silence critics and strip people of their right to political participation”.

“Holding everybody in public service to their legal obligations is one thing; but it is something else entirely to essentially attempt to purge everybody from any branch of government who holds and expresses a different viewpoint from that of the government,” he said.

There is no functioning opposition in Hong Kong’s parliament, after the democratic caucus resigned en masse in protest against the disqualification of four colleagues last year. More than 100 people have been arrested under the 2020 national security law, and thousands of others prosecuted over involvement in protests in 2019. – Guardian