Eyewitness footage captures a police officer shooting a protester in Hong Kong. Police claim that the protester, who was taken to hospital with serious injuries, was attempting to snatch the police officer's gun. Video: Cupid Producer/Reuters 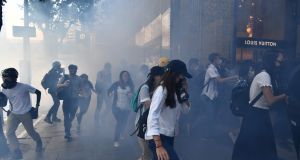 Violent clashes broke out across Hong Kong following the shooting by police of a demonstrator, in an escalation of the protests that have gripped the territory for the past five months.

Police confirmed that live fire was used and that one man had been shot during a confrontation with protesters, an incident that was filmed and circulated on social media. A separate video also went viral showing what appeared to be protesters dousing a man in liquid and setting him on fire. A third clip shared online showed a traffic police officer on the motorbike driving over protesters.

Many businesses closed their doors, while companies including HSBC and Deloitte advised their staff to leave work early, according to people familiar with the matter. Mainland businesses were also targeted, with an outlet of Bank of China vandalised and set on fire.

The Hang Seng index slid 2.6 per cent, its biggest one-day drop in more than three months.

In a press conference on Monday, Hong Kong’s chief executive Carrie Lam called the demonstrators “enemies of the people” who would never achieve their aims through violence.

Yet the latest independent opinion polls show the overwhelming majority of Hong Kong residents blame the central government in Beijing, Ms Lam’s administration or the police for escalating violence in the territory.

The latest clashes, some of the fiercest yet, were in response to the death of a student on Friday, in what is being treated by some protesters as the first fatality linked to the months-long demonstrations. A series of vigils were held over the weekend for 22-year-old Chow Tsz-lok.

“I’ve come out during my lunch break to the front line for the first time today,” said a 25-year-old accountant who did not want to be named. “We are so angry about what happened to Mr Chow. We have to protect Hong Kong and our friends.” He added that his manager did not know where he was and until today, he had previously been a moderate protester.

After calls from the demonstrators for a general strike, protesters blocked commuters from entering some metro stations. The operator of the Hong Kong metro said it had closed some stations, reduced the frequency of trains and suspended parts of some lines.

The shooting of the demonstrator occurred in the Sai Wan Ho neighbourhood of Hong Kong island. Video footage that was circulated widely online showed an officer grappling with a protester before firing towards another, who then falls to the ground. The territory’s Hospital Authority said one person was in a critical condition after being shot.

Police said the traffic officer who drove over the protesters had been suspended and that the incident would be investigated.

The clashes came after a senior Chinese official in Hong Kong said at the weekend that it was an “urgent task” to strengthen security legislation in the territory as a lack of such laws was partly to blame for the months of protests.

Zhang Xiaoming, head of the Chinese government’s liaison office in Hong Kong, said the local government’s failure to enact Article 23, which bars secession and subversion against Beijing, was one of the reasons for the recent unrest.

When the bill was proposed in 2003, 500,000 people marched against the legislation in what was, until June this year, the largest protest since the handover of Hong Kong from British to Chinese rule in 1997.

A panel of international experts appointed by the Hong Kong government said at the weekend that the Independent Police Complaints Commission, the local police force’s watchdog, lacked the investigative capacity to probe allegations of police brutality during the protests.

The demonstrations were sparked by an extradition bill that would have seen criminal suspects sent to mainland China for the first time. The protesters’ demands have broadened to include calls for an investigation into alleged police brutality and the right to elect the city’s leader. The bill has since been withdrawn. – Copyright The Financial Times Limited 2019