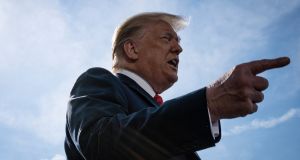 The community or ‘subreddit’, called ‘The_Donald’, has more than 790,000 contributors who are supportive of President Trump. Photograph: Pete Marovich/The New York Times)

Reddit, one of the largest social networking and message board websites, on Monday banned its biggest community devoted to President Donald Trump as part of an overhaul of its hate speech policies. The community or “subreddit”, called “The_Donald,” is home to more than 790,000 users who post memes, viral videos and supportive messages about Trump. Reddit executives said the group, which has been highly influential in cultivating and stoking Trump’s online base, had consistently broken its rules by allowing people to target and harass others with hate speech.

“Reddit is a place for community and belonging, not for attacking people,” Steve Huffman, the company’s chief executive, said in a call with reporters. “’The_Donald’ has been in violation of that.” Reddit said it was also banning about 2,000 other communities from across the political spectrum, including one devoted to the leftist podcasting group “Chapo Trap House,” which has about 160,000 regular users. The vast majority of the forums that are being banned are inactive.

“The_Donald,” which has been a digital foundation for Trump’s supporters, is by far the most active and prominent community that Reddit decided to act against. For years, many of the most viral Trump memes that broke through to Facebook, Twitter and elsewhere could be traced back to “The_Donald.” One video, “The Trump Effect,” originated on “The_Donald” in mid-2016 before bubbling up to Trump, who tweeted it to his 83 million followers.

Social media sites are facing a reckoning over the types of content they host and their responsibilities to moderate and police that content. While Facebook, Twitter, YouTube, Reddit and others originally positioned themselves as neutral sites that simply hosted people’s posts and videos, users are now pushing them to take steps against hateful, abusive and false speech on their platforms.

Some of the sites have recently become more proactive in dealing with these issues. Twitter started adding labels last month to some of Trump’s tweets to refute their accuracy or call them out for glorifying violence. Snap also recently said it would stop promoting Trump’s Snapchat account after determining that his public comments off the site could incite violence.

On Monday, streaming website Twitch suspended Trump’s account for violating its policies against hateful conduct. Trump’s channel had rebroadcast one of his campaign rallies from 2015, in which he denigrated Mexicans and immigrants, among other streams. Twitch removed the videos from the president’s account. – New York Times service

1 Garda detective charged with making death threats against ex-partner
2 How fraudsters used lockdown to lure Irish victims into boats and caravans scam
3 Miriam Lord: Minister for Agriculture tries to get himself out of the manure
4 Martin criticises ‘over-focus’ on Border poll ahead of Foster meeting
5 Barry Cowen tells Dáil he is profoundly sorry for ‘stupid’ drink-driving offence
Real news has value SUBSCRIBE