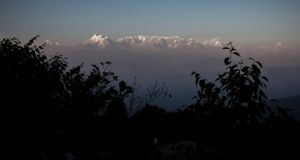 An operation to find the remaining three mountaineers missing in the Himalayas will resume on Tuesday. Photograph:Getty Images

Indian air force pilots have spotted five bodies in the Himalayas while searching for eight mountain climbers who have been missing a week.

District magistrate Dr Vijay Kumar Jogdande said the bodies were found on Monday before a rescue operation in the northern state of Uttarakhand was suspended because of heavy snowfall and high winds.

Martin Moran, who is originally from Tyneside, was leading the party of eight who were attempting to reach the top of an unclimbed peak in a remote area.

Dr Jogdande says an operation to find the other three mountaineers will resume on Tuesday.

He said officials are consulting with the Indian army on how to retrieve the bodies.

The eight-member expedition set out to scale a 6,477-metre peak and had last been in touch with base camp on May 26th. Contact was lost after an avalanche.

Dr Jogdande says four British climbers rescued from base camp on Sunday received first aid at a hospital and were released.