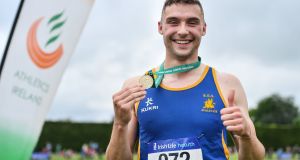 Part of the joy in watching the annual showcase of pure athletics talent that is the Irish Schools Track and Field Championships is the guessing and the predicting of what they might become.

Only with Aaron Sexton it’s also a case of what might have been.

Living up to his billing as Ireland’s Fastest Schoolboy, Sexton came out and broke both the senior boys sprint records with what only can be described as properly frightening speed and the purest of raw power.

Yet instead of guessing how much faster Sexton might run, how quickly he might make it all the way to the Olympic stage, his future is already committed to the rugby field, running with an oval ball in his hand, as he’s about to the enter the Ulster Rugby Academy once his A-Levels at Bangor Grammar School are out of the way.

His not quite done yet: Sexton will get a couple more chances to display his sprinting talent on the track at the European Under-20 Championships in Boras, Sweden in July, including the 4x100m relay, but ultimately it’s a case of rugby’s gain being the loss to Irish athletics. What might have been?

Sexton may have left a long lasting impression on the record books here; he came out first and improved the senior boys 100 metres to 10.43 seconds – the 18 year-old bettering the championship best performance of 10.59, which had stood to Marcus Lawlor of Carlow CBS since 2013.

Conor Morey of PBC Cork did give him a race out of the blocks, but once Sexton hit full stride – all 6ft4in and 90 kgs of him – there was only going to be one winner. Morey took second in 10.59

Exactly 70 minutes later, Sexton was on the track again for the 200m, and impressed even himself when the winning in 20.69 seconds – this time improving both the senior boys record and Irish junior record of 20.87, which had also stood to Lawlor since 2013.

Sexton’s previous best was the 21.06 he clocked when making the semi-finals at the World Under-20 Championships in Finland last July. His 20.69 here is also the fastest by any Under-20 in Europe so far this season, the first sub-21, the wind a legal +1.4m/s.

Truth is Sexton has also proved his equal worth on the rugby field. He already got his first game time for the province as a replacement against Gloucester in a pre-season friendly last August, still aged 17, and earlier this month, he was named Ulster A Player of the Year, on the back of his performances in the British and Irish Cup, where he scored seven tries.

Last October, in picking up two tries against Connacht A, he accelerated to 37.8 km/hr – which according to Ulster Rugby was the fastest player speed ever recorded by an Ulster player in a match, since they started measuring such statistics.

Of course all is not lost, naturally, and Tullamore showcased a wide range of athletics talent where potential is still a live game and none more impressively than Sarah Healy from Holy Child Killiney.

Like Sexton, Healy signed off on her already triumphant schools career with victory in the senior girls 3,000m and with another record to boot, her 9:24.52 properly smashing the previous mark of 9:43.02, which had gone to Charlotte Ffrench-O’Carroll of Loreto St Stephen’s Green, since 2007.

And like Sexton, Healy is also the fastest Under-20 in Europe in her distance. Last year, she won a distance double at the European Under-18 championships, and will have similar ambitions of winning a medal in Boras. She’s also likely to continue her athletics career at home, stating her preference to study in UCD, rather than pursue the US scholarship trail.

Darragh McElhinney from Coláiste Pobal Bantrai also completed a sweep of 1,500m titles at all grades, winning the senior boys title in 3:52:40 with another classy display of confident running. A week after becoming the first Irish teenager to go sub-14 minutes for 5,000m, McElhinney made no mistake when easing clear of Shay McEvoy from St Kieran’s Kilkenny at the bell, and will likewise fancy his medal chances in Boras come July.

Underage sprint medals already under their belt, Rhasidat Adeleke of Presentation Terenure won another sprint double at intermediate level, winning the 100m in 11.69, before Patience Jumbo-Gula from St Vincent’s Dundalk won the senior girls 100m in 11.81.

Having run a Leinster Schools 5,000m record of 14.34.22 last month, there were hopes for something similar from Efrem Gidey from Le Cheile Tyrellstown, who only came to Ireland two years ago from his native Eritrea, via a series of refugee camps including several months in the northern French port city of Calais.

Gidey again hit the front from the gun, the blustery conditions not helping his cause, and he finished in 14:45.35; still firmly intact therefore is the senior record of 14:17.0, which has stood to a certain John Treacy since 1974.

Among the other records set on the long day, across the 122 event programme, was the senior girls javelin mark, multi-event specialist Kate O’Connor from St Vincent’s Dundalk winning with a best of 48.17 metres. The coveted senior boys sprint relay title was won by Mercy Mounthawk in Tralee.