The US president Donald Trump and the first lady touched down at Stansted Airport ahead of their three-day trip to Europe. Video: The White House 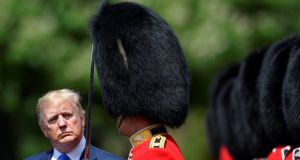 US president Donald Trump inspects the guard of honour during a ceremonial welcome at Buckingham Palace. Photograph: Toby Melville/PA Wire

Donald Trump went on the offensive against the mayor of London, so-called “fake news” and China before meeting Queen Elizabeth at Buckingham Palace.

The US president wasted little time in taking aim at some familiar targets as he began his three-day state visit to the UK.

As he touched down on Monday he branded London Mayor Sadiq Khan a “stone cold loser” in a Twitter tirade.

He also appeared to use some downtime before meeting the Queen to watch TV and berate both “fake news” CNN and China.

Mr Trump and the first lady were greeted by the Prince of Wales and Duchess of Cornwall as they stepped from the Marine One helicopter in the grounds of the palace shortly after midday.

The pair were then taken to meet the queen – their second introduction following Mr Trump’s working visit to Britain last summer.

Wearing a muted jade A-line coat and pleated dress in shades of grey, jade and dusky pink with a matching hat, the queen shook hands warmly with Mr Trump and smiled broadly before turning to greet Mrs Trump.

Prince Charles accompanied the president as he strode on to the lawns to inspect the guard of honour and chatted at length with some of the guardsmen.

Watching from a palace balcony overlooking the garden was Mr Trump’s daughter Ivanka and her husband – the president’s adviser Jared Kushner.

Following his criticism of Mr Khan, the mayor’s office fired back, saying Mr Trump was offering “childish insults which should be beneath the President of the United States”.

The spat came at the beginning of a visit that will see Mr Trump take part in a number of royal engagements, as well as meeting Theresa May in her final days as British prime minister.

Mr Trump had already created a considerable degree of political turbulence ahead of the visit, with comments in recent days on the Tory leadership race, Brexit and the Duchess of Sussex.

Speaking to reporters just before he left the US, he praised Boris Johnson and Nigel Farage, talked up the prospect of a Brexit trade deal and rebuked Mr Khan, who on Sunday described the president as “just one of the most egregious examples of a growing global threat” and compared the language he has used to that of the “fascists of the 20th century”.

As he landed he fired off two tweets, spelling the London mayor’s name “Kahn” in one and in another writing: “ SadiqKhan, who by all accounts has done a terrible job as Mayor of London, has been foolishly “nasty” to the visiting President of the United States, by far the most important ally of the United Kingdom. He is a stone cold loser who should focus on crime in London, not me.”

A spokesman for Mr Khan said: “This is much more serious than childish insults which should be beneath the President of the United States.

“Sadiq is representing the progressive values of London and our country warning that Donald Trump is the most egregious example of a growing far-right threat around the globe, which is putting at risk the basic values that have defined our liberal democracies for more than 70 years.”

The US president and Mr Khan have repeatedly clashed in recent years, including Mr Trump criticising the mayor’s response to the 2017 London Bridge terror attack.

Foreign secretary Jeremy Hunt hit out at Mr Khan for showing “great discourtesy” to the president and accused Labour of “virtue-signalling of the worst kind” over the visit.

A large crowd gathered outside Buckingham Palace in the sunshine as they awaited the arrival of the Trumps, with many holding their camera phones aloft as the pair were helicoptered in.

A huge security operation is in place for the visit, and police officers could be seen standing at three different points on the roof at the front of the palace.

One protester, who dressed in a costume she called “the statue of taking liberties”, said she did not think it was right that Mr Trump was allowed to make a state visit.

Auriel Glanville (76) from London, said: “Climate change is at the top of the agenda and he’s not addressing that.”

Ms Glanville, who spoke from outside the palace, said she hoped Mr Trump’s tea with Charles later would be an opportunity to bring up the issue of climate change.

Earlier, after arriving at Winfield House, the US ambassador’s residence in the capital, Mr Trump took aim at first China and then CNN, tweeting: “Just arrived in the United Kingdom. The only problem is that CNN is the primary source of news available from the US. After watching it for a short while, I turned it off. All negative & so much Fake News, very bad for US. Big ratings drop. Why doesn’t owner ATT do something?”