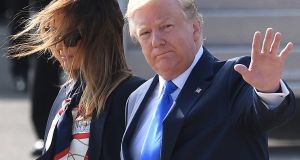 US President Donald Trump and First Lady Melania Trump arrive at Stansted Airport at the start of a state visit to England. Photograph: Getty 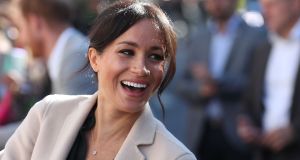 In an interview with the Sun Mr Trump said in reference to Meghan, Duchess of Sussex: ‘I didn’t know that she was nasty’. Photograph: Getty

US president Donald Trump has claimed he did not call Meghan, Duchess of Sussex, “nasty” when giving an interview to the Sun despite an audio recording released by the paper showing he did.

Speaking to the paper ahead of his visit to the UK on Monday, Mr Trump was told Meghan “wasn’t so nice” about him during the 2016 US presidential campaign, to which he replied: “I didn’t know that. What can I say? I didn’t know that she was nasty.”

In a series of early morning tweets on Sunday, the US president said he “never called Meghan Markle nasty” and that the “Fake News Media” had invented his remarks.

He said it was “Made up by the Fake News Media, and they got caught cold! Will CNN, NY Times and others apologize? Doubt it!”

The Sun then posted a recording of the original interview proving that their reporting was accurate.

I never called Meghan Markle “nasty.” Made up by the Fake News Media, and they got caught cold! Will @CNN, @nytimes and others apologize? Doubt it!

In the interview, Tom Newton-Dunn, the Sun’s political editor, said to Mr Trump: “[Markle] can’t make it because she’s got maternity leave. Are you sorry not to see her? Because she wasn’t so nice about you during the campaign. I don’t know if you saw that.”

Newton-Dunn continued: “She said she’d move to Canada if you got elected. It turned out she moved to Britain.”

Mr Trump said: “A lot of people moving here, so what can I say? No, I didn’t know that she was nasty.”

The property mogul turned politician went on to say that having an American princess was “nice” and that he was sure she would do “excellently”.

Meghan described Mr Trump as “misogynistic” and “divisive” during an appearance on Comedy Central’s The Nightly Show with Larry Wilmore.

She will not be taking part in the royal functions around Trump’s visit because she is looking after her three-week-old baby, Archie. - Guardian