Fear and suspicion in Delhi after worst sectarian violence in decades 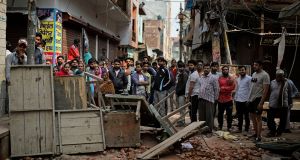 Residents stand behind a makeshift barrier at the mouth to a lane splattered with bricks following violence in New Delhi, on Friday. Photograph: Altaf Qadri/AP

There was an edgy calm in the riot-torn neighbourhoods of India’s federal capital New Delhi on Friday following days of sectarian clashes. The death toll from this week’s violence rose to 42 after more bodies were recovered from drains and ponds in the city’s northeast districts.

More than 300 people remain hospitalised, at least 80 of them critical with bullet wounds and burn injuries sustained in pitched battles between Hindu and Muslim mobs armed with guns, sticks, iron rods, acid and petrol bombs. The violence began last weekend, and raged unchecked until Wednesday.

Equally dazed Hindu and Muslim survivors in the contiguous areas of Jaffrabad, Bhajanpura, Chandpura and other nearby localities began tallying their losses on Friday in Delhi’s worst communal riots in decades.

Many picked their way down streets splattered with blood and littered with broken glass, stones and bricks and past hundreds of burnt vehicles, scores of charred houses and commercial establishments.

Several temples and mosques had been vandalised or partially burnt as Delhi police personnel looked on. The chaos engulfed narrow and intertwined alleyways where Hindus and Muslims had lived in harmony for decades.

No firemen or emergency medical personnel were able to access these troubled areas and many people from both communities who were beaten by mobs eventually died on the streets.

“We [Hindus and Muslims] have been co-existing here peacefully since our childhood and I never thought I would live to witness such violence,” said Feroz Ahmed, a 38-year-old resident of Noor-e-ilahi colony near Jaffrabad, who said few thought that Hindu-Muslim riots were possible in Delhi.

Santosh Garg (52) from nearby Bhajanpura said he had lived there for 35 years and never had a problem with his Muslim neighbours. “I cannot understand what happened,” he said.

Mutual fear and suspicion have now replaced cordiality, which many analysts and officials fear will widen schisms between the two communities, not only in Delhi but across India.

Hindus constitute about 80 per cent of India’s population of more than 1.3 billion, while Muslims comprise about 15 per cent.

“The Delhi violence looks more like a prelude to a possible pogrom or at least a ghettoisation [of Muslims],” said India’s leading social analyst in the Indian Express on Thursday. He warned that if timely action was not initiated, India would degenerate into a “charnel house of rotted moralities and a nation that measures itself by the cruelties it can inflict”.

Federal animal husbandry minister Giriraj Singh, for instance, declared earlier this month that India had committed a “major lapse” by not forcing all Muslims into Pakistan following the country’s partition by the British at independence in 1947.

The BJP’s latest provocation, which resulted in Delhi’s riots, was its recent citizenship law, which guarantees Indian citizenship to all communities except Muslims from three neighbouring Islamic countries: Afghanistan, Bangladesh and Pakistan.

Many Indians, especially Muslims, claim the Citizenship Amendment Act invalidates the country’s constitution and secularity by basing citizenship on religion, and they organised peaceful sit-in protests against it in Delhi. These later degenerated into sectarian violence.

Allegations of a partisan role played by Delhi police during the riots have also emerged.

A Delhi high court judge who was critical of police inaction in containing violence in the capital was transferred on Wednesday night, hours after he censured the authorities for mishandling the communal clashes.

“We can’t let another 1984 scenario happen in this city [Delhi], especially under the watch of this court,” Justice Muralidhar declared.

The judge was referring to the pogrom against Sikhs in Delhi in November 1984 after prime minister Indira Gandhi was assassinated by two of her Sikh bodyguards.

More than 3,000 Sikhs were massacred over three days by Hindus, following which several Delhi police personnel were indicted, albeit years later, for both their inaction and complicity in assisting the mobs.

The two-judge bench that succeeded Muralidhar has adjourned hearing the case to April 13th after Delhi police asked for time to file its response, further fuelling Muslim insecurities.