Scientists say radiocarbon analysis shows that the remains of a puppy discovered in permafrost in Siberia, Russia are 18,000-years-old - meaning the animal could be the oldest domesticated canine ever discovered. Video: Reuters 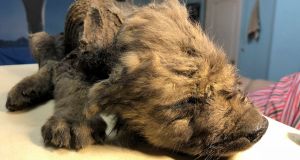 An 18,000-year-old puppy buried for centuries in a lump of frozen mud was unveiled on Monday by scientists who hope it can help bridge the connection between dogs and wolves.

The puppy, which was male, was discovered 18 months ago, preserved in a layer of permafrost in Siberia’s Far Eastern reaches, according to Dave Stanton, a research fellow at the Center for Palaeogenetics in Stockholm and one of the scientists who examined its DNA.

The fur, skeleton, teeth, head, lashes and whiskers of the pup, named Dogor, are still intact, he said. But scientists don’t know whether it is a dog or wolf. Stanton said more DNA research would be conducted in the coming months. “We need to put this information into context,” he said in an interview.

Many scientists say dogs evolved about 15,000 years ago from a species of extinct wolves. Others suggest it could have happened much earlier, perhaps 30,000 years ago or more. These wolves evolved after generations of exposure to humans, were domesticated and became the canine companions we know today.

Genome analyses shows it's a male. So we asked our Russian colleagues to name it...

Thus, the name of the puppy is Dogor!

David Stanton (@Nibbledtodeath) from the Centre for Palaeogenetics (@CpgSthlm) tells @bevvo14 what they can learn from examining the perfectly preserved body of a puppy believed to be more than 18,000 years old... #Dogor #TheWorld pic.twitter.com/qi37i6zy7n

The puppy, which was found by locals, is being studied at North-Eastern Federal University in Yakutsk, the capital of Yakutia, a sprawling region in eastern Siberia that constitutes 20 per cent of Russia. (The puppy remains were found near Yakutsk.) Nikolai Androsov, director of the Northern World museum where the remains will be kept, presented the discovery on Monday, according to The Associated Press. Yakutia is known for its oil and gas reserves and abundance of diamond mines.

Several extinct animals have been found in the thick permafrost, in part because of the melting of ice resulting from climate change. They include a male steppe bison, a woolly rhinoceros, a mummified pony and several mammoths. Stanton said treasure seekers sometimes used water cannons to break through the permafrost to extract mammoth ivory tusks, which are later sold. “It must have frozen quickly before scavengers could get to it,” Stanton said of the puppy. “We also found a lot of samples that were not well preserved. There seems to be natural traps in the landscape where animals are frozen before they decomposed.”

He said the DNA used to date the puppy and figure out its gender was extracted from a rib bone. He said he was not sure if a necropsy was performed to see if its organs, including the heart and liver, were intact.

“The body is well preserved, which is rare,” Stanton said. “It’s the best I’ve seen.”

Modern dogs are not like modern wolves. Wolves are reticent to eat in front of people, for example, while domesticated dogs beg for dinner table scraps. Their physiology is different, with dogs having shorter snouts and wider skulls. And male wolves participate in pup raising, while male dogs generally avoid it.

Stanton said the dating of the dog was done at Oxford University, and he and his colleagues will continue to collaborate with scientists at North-Eastern Federal University. “We need to look at more samples from that time period,” he said. “Then we will be able to understand if it was a dog or a wolf.” – New York Times