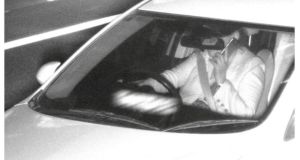 NSW is starting to deploy mobile phone detection cameras that operate day and night and in all weather conditions to detect drivers using a mobile phone. Photograph: Transport for NSW

The Australian state of New South Wales on Sunday started deploying mobile phone detection cameras in a bid to cut the number of fatalities on its roads by a third over two years, transport authorities said.

The mobile phone detection programme, one of the first in the world, involves cameras operating day and night in all weather conditions to determine if a driver is handling a mobile phone, according to Transport for NSW, which manages the state’s transport services.

The Netherlands launched a similar system in October, fining drivers €240 for illegal use of mobile phones, according to a statement on a Dutch police website.

Making or receiving voice calls while driving in NSW is legal, but only when using a hands-free device. All other functions, such as video calling, using social media and photography, are illegal while behind the wheel.

So far this year 329 people have died on NSW roads, compared with 354 people for all of 2018, according to official statistics. The state wants to cut the number of road fatalities by 30 per cent by 2021.

The mobile phone detection cameras use artificial intelligence to review images and detect illegal use of the devices, Transport for NSW said in a statement.

Images that the automated system identifies as likely to contain a driver illegally using a mobile phone are verified by authorised personnel.

For the first three months after the detection systems are in operation, offending drivers will be issued warning letters.

In both cases, drivers will also receive penalty points. - Reuters