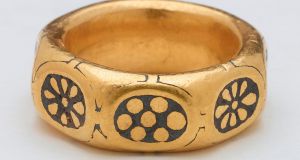 Gold ring recovered as part of a treasure hoard, a mixture of intact ornaments, bullion and coins, which is typical of Viking hoards. Photograph: West Mercia Police /AFP via Getty Images 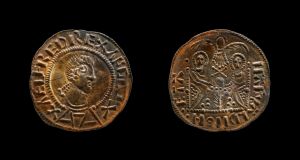 ‘Emperor’ style coin issued by King Alfred the Great of Wessex (871-99) and his contemporary Ceolwulf II of Mercia (874-9) as part of a treasure hoard discovered near Eye in Herefordshire. Photograph: West Mercia Police/AFP

Two British metal detectorists have been jailed for stealing the “emblematic” Viking-era Leominster Hoard of coins and priceless jewellery worth up to £12 million (€14m) — much of which is still missing.

George Powell (38) and Layton Davies (51) failed to declare an “invaluable” collection of buried treasure dating back 1,100 years to the birth of a united English kingdom, during the time of Alfred the Great.

The items, many of which were Anglo Saxon but are typical of a Viking burial hoard, were dug up on Herefordshire farmland on June 2nd 2015.

It is thought the trove was buried by someone within the Great Viking Army in either 878 or 879, which by then was being forced back east by an alliance of Saxon forces.

Powell, who was described as having the “leading” role, was jailed for 10 years while caretaker Davies received eight-and-a-half years.

Both were also convicted alongside two other men, 60-year-old Paul Wells and Simon Wicks (57) with conspiring to conceal the find.

Sentencing at Worcester Crown Court on Friday, Judge Nicholas Cartwright said they had “cheated” not only the landowner but the public of “exceptionally rare and significant” coins.

He said: “90 per cent of the coins or thereabouts remain hidden to this day.

“You, Simon Wicks, were part of a conspiracy to conceal the stolen treasure and to sell it.

“Paul Wells, who will be sentenced a on future occasion, was part of a conspiracy to conceal part of the stolen treasure.”

He added: “The irony in this case is if you, George Powell, and you, Layton Davies, had obtained the permissions and agreements which responsible metal detectorists are advised to obtain, if you had gone on to act within the law after you found this treasure, you could have expected to have either a half share, or at very worst a third share of over £3 million to share between the two of you.

“But you wanted more.”

Among the priceless hoard was a ninth century gold ring, a dragon’s head bracelet, a silver ingot, a crystal rock pendant dating to the fifth century and up to 300 coins, some dating to the reign of King Alfred.

Only 31 of the coins have been recovered, although mobile phone photographs on Davies’s phone — later deleted, but recovered by police — showed the larger hoard, still intact, in a freshly dug hole.

Five of the coins are examples of the exceptionally rare Two Emperors penny, valued at up to £50,000 apiece, and so-called as they depict King Alfred and a lesser known monarch, Ceolwulf II, who reigned in the old kingdom of Mercia, sitting together.

Expert analysis of all the jewellery and coinage recovered to date and now held at the British Museum returned a valuation of at least £581,000.

Wicks, Powell and Davies were also found guilty of converting their ill-gotten gains into cash, after police traced several coins that had been sold on to private collectors, hidden away or left with expert valuers.

Powell, of Kirby Lane, Newport; Davies, of Cardiff Road, Pontypridd; Wells, of Newport Road, Cardiff, and Wicks, of Hawks Road, Hailsham, East Sussex, were also convicted after trial of ignoring the law stating such finds must be properly declared.

Wells was not present in court after being taken ill on Thursday, and is due to be sentenced for his part next month.

Coin collector Wicks, who had previous convictions for “night-hawking” — searching with a metal detector without the landowner’s permission — going back to 2014, was jailed for five years.

Prosecuting barrister Kevin Hegarty QC said an expert valuation of the hoard had found it could be worth between £3 to £12 million, adding a find of “immense archaeological, historical and academic value” had been lost to the nation.

Mr Hegarty said: “As a direct result of the actions of the defendants, a significant and irreversible harm has been caused to the site.”

He added: “The Leominster Hoard represents a nationally important assemblage created at the very point England was forming and becoming a nation with a single identity under the vision of Alfred the Great.

“As such this hoard should be considered emblematic of a period where English identity was being formed.”

He said there had been a significant degree of planning, with the men stealing, concealing and then breaking up the coin hoard, offering items for sale to private dealers and auctioneers.

Both Powell and Davies claimed talk of a 300-coin hoard had been a rumour, insisting that the only coins they found were declared to the National Museum Wales, in Cardiff, at a meeting on July 8th.

However, they were undone by evidence including deleted photos of a much larger hoard on Davies’s phone and the recovery of various coins, including five concealed in a magnifying glass case and volunteered to police by Wells.

As to the fate of the rest of the hoard, Powell’s barrister James Tucker told the judge his client, who is a father of two, “isn’t in a position to assist” their recovery.

He added: “It is clear, from his point of view, he wishes he had never found the treasure.

“It became a temptation — and for him a curse.”

There will be a Proceeds of Crime Act hearing in the new year.–PA

1 Tyrone midwife on the cover of Vogue magazine
2 Covid-19: Limited easing of restrictions proposed as pressure grows to reopen Irish economy
3 George Floyd death: Trump accused of ‘trying to divide’ by ex-defence chief Mattis
4 All pupils will not be able to return to class at same time, INTO warns
5 Nursing homes dispute accuracy of HSE data on Covid-19 deaths
Real news has value SUBSCRIBE