Destruction increased 64 per cent in April, compared with the same month a year ago 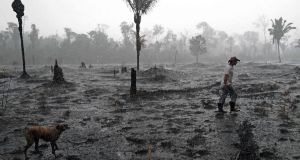 In this file photo taken on August 26th, 2019 Brazilian farmer Helio Lombardo Do Santos and a dog walk through a burnt area of the Amazon rainforest, near Porto Velho, Rondonia state, Brazil. Photograph: Carl de Souza/AFP via Getty Images

Deforestation in Brazil’s Amazon rainforest rose sharply in April, government data showed on Friday, as the coronavirus outbreak keeps many environmental enforcers out of the field and the country prepares to deploy troops to fight illegal logging.

Destruction in Brazil’s portion of the Amazon increased 64 per cent in April, compared with the same month a year ago, according to preliminary satellite data from space research agency INPE.

In the first four months of the year, Amazon deforestation was up 55 per cent from a year ago to 1,202 sq km (464 square miles), according to the INPE data.

The Amazon is the world’s largest tropical rainforest, and scientists say its preservation is vital to curb global warming because of the vast amount of greenhouse gas that it absorbs.

Destruction of the Amazon surged to an 11-year high last year and continues to climb in 2020, which environmentalists blame on the policies of right-wing president Jair Bolsonaro who has emboldened illegal loggers, miners and ranchers.

Mr Bolsonaro has called for more farming and mining in protected areas of the forest, saying it is the only way to lift the region out of poverty.

The new coronavirus outbreak has complicated efforts to combat deforestation, with environmental enforcement agency Ibama sending fewer agents into the field due to health risks. The agency has said it will scale back field agents in other at-risk areas but not the Amazon.

“The pandemic has not helped because there are apparently less agents out there, and illegal loggers obviously don’t care about the virus in remote areas of the Amazon,” said Paulo Barreto, senior researcher for non-profit Amazon institute Imazon.

Mr Barreto and other environmentalists, including Greenpeace, said the surge was already under way last year due to government steps that encouraged illegal logging, in particular a decree now before Congress that could give title to land grabbers who invaded public and indigenous lands.

As deforestation soars, Mr Bolsonaro on Thursday authorised the deployment of armed forces to deter illegal loggers and combat deforestation and forest fires in the region. Environmental advocates say the measure may help in the short term but is not a lasting solution.

Ibama agents have expressed dismay that deforestation has continued to surge in recent months despite the current rainy season in the Amazon, which makes the jungle harder to traverse and usually deters illegal loggers.

Parts of the Amazon that are hot spots for deforestation such as southern Para state have seen higher than average rain levels, which would normally lead to a fall in deforestation, Carlos Nobre, an earth systems scientist at University of Sao Paulo, told Reuters.

Mr Nobre warned that the rains will ease in the next three months as the dry season takes hold, which is when deforestation peaks in most years.–Reuters