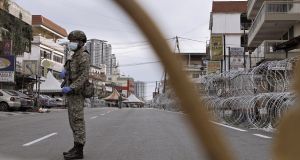 A member of the Malaysian Royal Armed Force guards a street in a neighbourhood that has been put under Enhanced Movement Control Order (EMCO) on May 1st, 2020 in Kuala Lumpur, Malaysia. Photograph: Rahman Roslan/Getty Images

Malaysian authorities are rounding up undocumented migrants as part of efforts to contain the spread of coronavirus, officials said, after hundreds of migrants and refugees were detained in the capital Kuala Lumpur.

Authorities said 586 undocumented migrants were arrested during a Friday raid in a downtown area where many foreigners live, a move the United Nations said could push vulnerable groups into hiding and prevent them from seeking treatment.

Police said the operation was aimed at preventing undocumented migrants from travelling to other areas amid movement curbs imposed to contain the spread of the outbreak, state news agency Bernama reported.

The United Nations urged Malaysia to avoid detaining migrants and release all children and their caregivers, warning that overcrowded detention centres carried a high risk of increasing the spread of the virus, also known as Covid-19.

“The fear of arrest and detention may push these vulnerable population groups further into hiding and prevent them from seeking treatment, with negative consequences for their own health and creating further risks to the spreading of Covid-19 to others,” the United Nations said in a statement.

The arrests followed public anger in recent days over the presence of migrants, particularly Rohingya refugees, with some in Malaysia accusing them of spreading the coronavirus and being a burden on state resources.

Malaysia has about 2 million registered foreign workers but authorities estimate many more are living in the Southeast Asian country without proper documents. Malaysia does not formally recognise refugees, regarding them as illegal migrants.

Security minister Ismail Sabri Yaakob refuted criticism of the arrests, saying that all of those detained had been screened and found to have tested negative for the virus.

They would be sent to immigration detention centres to await further action, he told reporters on Saturday.

“Even though the migrants were living under lockdown, their presence here is still illegal,” the minister said.

“There is no issue of cruelty towards these migrants as they have been well taken care of... but action must still be taken against them under the law.”

The neighbourhood where the raid had taken place was close to an area with three buildings that had been placed under strict lockdowns last month after a surge in coronavirus cases there.

About 9,000 people live in the buildings, most of whom are foreign nationals, and 235 of them have tested positive for Covid-19, the government has said.

Authorities on Saturday also defended plans to ease coronavirus lockdown measures next week even as the number of new infections jumped to a two-week high.

Most businesses will reopen on Monday after a six-week shutdown. Schools, cinemas and nightclubs will remain closed, along with the country’s borders, and mass gatherings will still be banned.

The decision has sparked criticism, including from members of the ruling coalition, that restrictions were being eased too soon.

The number of new infections with the novel coronavirus rose by 105 on Saturday, the highest daily increase since April 16th. The number of known infections totalled 6,176 while fatalities stood at 103.

Mr Ismail Sabri said Malaysia was not being hasty in relaxing the curbs, stressing that businesses reopening on Monday will have to implement hygiene and social distancing measures.

Former prime minister Najib Razak, whose political party UMNO is part of the ruling coalition, said the easing announced by Muhyiddin was “huge and sudden” and that there was no rush to reopen the economy, local media reported.

A Change.org petition to stop the measures from being partially lifted had garnered over 250,000 signatures on Saturday.-Reuters