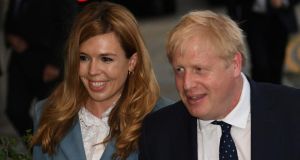 Boris Johnson and Carrie Symonds have named their son Wilfred Lawrie Nicholas Johnson, in a tribute to their grandfathers and the doctors who recently treated the British prime minister.

Ms Symonds (32) posted a picture of her cradling the newborn on Instagram on Saturday, saying she “couldn’t be happier” and that her “heart is full”.

She praised the maternity team at University College Hospital in London, who she said “looked after us so well”.

The couple announced on Wednesday that Ms Symonds had given birth to a baby boy earlier that day.

The birth came just weeks after Mr Johnson was discharged from intensive care after contracting coronavirus.

“Thank you so, so much to the incredible NHS maternity team at UCLH that looked after us so well. I couldn’t be happier. My heart is full.”