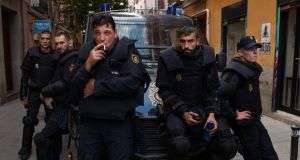 Antidisturbios: ‘In the series we are treated like virtual criminals, ’one policeman complained

Spain’s television output and its riot police may not appear to have a great deal in common, but take a closer look and there are at least some similarities. With each on a tight budget and having fostered a reputation for a lack of subtlety, over the years they have each been derided, and even reviled, by many.

But a new TV series has helped challenge such perceptions on the way to becoming a runaway commercial and critical hit. Antidisturbios (or Riot Police) is a mini-series that follows the fortunes of a six-member police unit after an eviction they are called out to enforce goes horribly wrong. As the internal affairs department investigates, it becomes apparent that something more powerful and sinister is afoot.

They snort cocaine, stalk ex-girlfriends, suffer panic attacks and hernias and generally struggle with the strain of everyday life

A string of hyper-realistic set-piece scenes runs through the six-part series, including the eviction itself and an adrenalin-packed pitched battle between officers and French football fans outside the Bernabéu stadium in Madrid. The personal lives of the police are also explored through fine central performances, such as that of Spanish-Armenian actor Hovik Keuchkerian, who plays the world-weary, avuncular senior officer of the unit, Patrick Criado as a young hothead, and Vicky Luengo, playing the obsessive, Serpico-like agent investigating them.

Beyond the shields, batons and alpha male banter of their day job, we see a more personal side to the riot police as they snort cocaine, stalk ex-girlfriends, suffer panic attacks and hernias and generally struggle with the strain of everyday life.

It makes for outstanding viewing. Antidisturbios, which is broadcast by Movistar+, raises the bar for Spanish television and holds its own in the company of the best English-language series currently on subscription platforms.

It also offers a nuanced insight into a police unit that has frequently been in the public eye in recent years but whose members have been widely regarded as little more than violent tools of the state.

“It’s a group of professionals who are so hated and controversial,” the 39-year-old director of the series, Rodrigo Sorogoyen, told The Irish Times. “Unfortunately, over the last 10 years or so, they have become more and more well-known, for reasons that we are all familiar with.”

The police’s now-notorious charges into peaceful indignados demonstrators in Madrid, in 2011, is one example. The shocking scenes of baton-wielding agents in Catalonia attacking unarmed voters in 2017 is another.

The series casts the police as the unloved puppets of higher powers who obey orders even when those are driven by greed, rather than justice

Sorogoyen saw a challenge in exploring the human beings behind such brutal actions. But he, Isabel Peña and Eduardo Villanueva, with whom he co-wrote the script, also found an opportunity to tell a wider story about contemporary Spain.

“We were interested in the story of the riot police but then we saw that these people are right at the bottom of the pile,” the director said. “And as we looked up above them we started writing about corrupt former police officers, about real estate corruption, about under-the-counter politics. And we realised that we wanted to tackle all that stuff.”

The series casts the police as the unloved puppets of higher powers who obey orders even when those are driven by greed, rather than justice. With dozens of corruption scandals in Spain in recent years, there was plenty of raw material from which to draw.

The character of Revilla, a former police officer whose behind-the-scenes string-pulling makes or breaks the careers of politicians and officials, seems to be rooted in real life. Even his beard and flat cap resemble those of José Manuel Villarejo, an ex-cop currently awaiting trial whom the Spanish media credits with running a massive deep-state apparatus.

“What really interests the creators [of this series] is rummaging around in the sewers of power,” noted El Periódico newspaper, in one of many enthusiastic reviews the Spanish press has given Antidisturbios.

However, despite the acclaim, some police organisations and their members have attacked the series. The SUP police union described it as “humiliating and defamatory”, while the JUPOL union said it was “absolute garbage”.

“In the series we are treated like virtual criminals,” one policeman told Diario Sur newspaper, as he complained about the handful of scenes in which characters drink heavily or take drugs.

Such responses seem to misunderstand the intention of Antidisturbios, which is to avoid the moral simplicity of pitting goodies against baddies. They also fail to realise that, after years of being stigmatised, this is a sympathetic, human portrayal of Spain’s riot police.

“We never wanted to insult anyone,” said Sorogoyen. “On the contrary, after making this series the biggest sensation it left us with was one of . . . I wouldn’t want to use the word pity, but certainly concern for the riot police.”