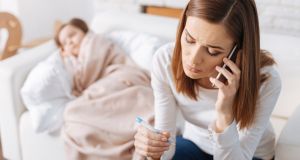 “Maybe years of careful practice have been undermined, and everyone will be looking for the antibiotic over the phone when all this is over.” File photograph: iStock

I was wearing a mask, gloves, goggles and a papery blue gown that flapped in the breeze. The little girl’s lower lip was wobbling, but she was holding the tears in. We were crouched behind the hedge in my car park. Dad stood at a respectful distance while keeping up a helpful patter of encouragement. The birds were ignoring us and getting on with the business of spring: singing, fighting and chasing other birds through the foliage. They seem very loud this year; maybe because the humans and their machines are so quiet.

‘Chronic disease management’ seemed like a distant memory from a happier time.

We had put just one patient on our books for chronic disease management before everything changed.

The principle was good. GPs would invite anyone over 85 who had ongoing problems such as diabetes into the office for a standardised treatment plan and review them every six months. It is difficult to believe that was launched only a few weeks ago. Now it seems like something for Reeling in the Years.

The first one took ages, squinting at the computer and ticking boxes. But that did not matter. We expected to be rattling through those consultations in no time when we got used to it.

A chronic condition means one that lasts a long time. Most conditions in the elderly are manageable, but have to be tweaked regularly. If your blood pressure is too high you are at risk of a stroke; if it is overtreated and goes too low you can be at risk of fainting. It is a bit like steering a car down a motorway. An occasional touch keeps you in the right direction.

I have not taken anybody’s blood pressure for weeks. Those with chronic conditions are staying at home. Many of them have blood pressure machines themselves, they can take their own blood sugars and they are leaving us firmly alone.

One GP told me of a man who had a retinal detachment and let it go until he nearly went blind. We can still get people into hospital if the condition is serious and we are getting good at working in ways that have been unthinkable until now.

The rediscovered art of seeing people in cars is one of them. When I was a young GP in a rural area some 30 years ago, a car would pull up, with a man sandwiched in the back between brawny family members as he was going to the big psychiatric hospital to dry out, and they were leaving him where he was, thanks all the same and they just needed the letter.

They always got it.

Now, I have given a few injections to people in cars. I also look at rashes on mobile phones and ask can they point to where it hurts.

I have also prescribed antibiotics over the phone. If a trainee doctor came up with that one in their exams they would have to give a damned good reason not to be failed. What was deemed bad practice has become necessary and we are finding ways to make those strategies safe. We are like professional musicians who used to do a scrupulous soundcheck and are now are bashing out live-streaming sessions from their kitchens.

Maybe years of careful practice have been undermined, and everyone will be looking for the antibiotic over the phone when all this is over. The online consultation might be the new future. Out-of-hours co-ops are restructuring to cope with the emergency, and may never go back to what had been normal.

As we stood there in the shelter of the hedge in the spring sunshine it seemed like a common or garden viral illness. A bit of TLC and she would be grand. And she was, but it was Covid-19 all right , as someone else in the house subsequently tested positive. The rarity had become common or garden.

When I see my next chronic care management patient it will take just as long to tap in the details as the first.

But nobody will mind.

Róisín Ingle: Even Matt Damon has fecked off back home
4

We must consider the negative health consequences of the lockdown
8

Food and drink quiz: Who drinks the most Guinness in the whole wide world?
9