China defends Xinjiang camps as it takes reporters on tour 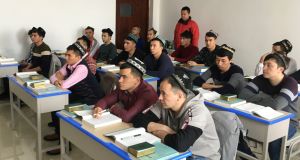 China will not back down on what it sees as a highly successful de-radicalisation programme in Xinjiang that has attracted global concern, but fewer people will be sent through, officials said last week in allowing rare media access there.

Beijing has faced an outcry from activists, scholars, foreign governments and UN rights experts over what they call mass detentions and strict surveillance of the mostly Muslim Uighur minority and other Muslim groups who call Xinjiang home.

In August, a UN human rights panel said it had received credible reports that a million or more Uighurs and other minorities in the far western region are being held in what resembles a “massive internment camp”.

Last week, the government organised a visit to three such facilities, which it calls vocational education training centres, for a small group of foreign reporters, including Reuters.

In recent days, a similar visit was arranged for diplomats from 12 non-western countries, including Russia, Indonesia, India, Thailand and Kazakhstan, according to Xinjiang officials and foreign diplomats.

Senior officials, including Shohrat Zakir, Xinjiang’s governor and the region’s most senior Uighur, dismissed what they called “slanderous lies” about the facilities.

Speaking in Xinjiang’s capital, Urumqi, Shohrat Zakir said the centres had been “extremely effective” in reducing extremism by teaching residents about the law and helping them learn Mandarin.

“As time goes by, the people in the education training mechanism will be fewer and fewer,” he said.

Shohrat Zakir said he could not say exactly how many people were in the facilities.

“One million people, this number is rather frightening. One million people in the education mechanism – that’s not realistic. That’s purely a rumour,” he said, stressing they were temporary educational facilities.

Dilxat Raxit, spokesman for the Munich-based exile group the World Uyghur Congress, said the Chinese government was using extremism as an excuse to lock people up.

“What they are trying to do is destroy Uighur identity,” he said.

Human rights groups and former detainees have said that conditions in the camps are poor, with inmates subject to abuse. They said detainees did not receive vocational training.

Seeking to counter that narrative, the government took reporters to three centres, in Kashgar, Hotan and Karakax, all in the heavily Uighur-populated southern part of Xinjiang, where much of the violence has taken place in recent years.

In one class reporters were allowed to briefly visit, a teacher explained in Mandarin that not allowing singing or dancing at a wedding or crying at a funeral are signs of extremist thought.

The students took notes, pausing to look up as reporters and officials entered the room. Some smiled awkwardly. Others just looked down at their books. All were Uighur. None appeared to have been mistreated.

In another class, residents read a Chinese lesson in their textbook entitled “Our motherland is so vast.”

There was plenty of singing and dancing in other rooms reporters visited, including a lively rendition in English of “If You’re Happy and You Know It, Clap Your Hands,” that seemed to have been put on especially for the visit.

Several residents agreed to speak briefly to reporters, though all in the presence of government officials. Reporters were closely chaperoned at all times.

All the interviewees said they were there of their own accord after learning of the centres from local officials.

Many answers used extremely similar language about being “infected with extremist thought”.

Pazalaibutuyi (26) told reporters at the Hotan centre that five years ago she had attended an illegal religious gathering at a neighbour’s house, where they were taught that women should cover their faces.

“At that time I was infected with extremist thought so I wore a face veil,” she said, speaking clear Mandarin after a year at the centre.

Government officials came to her village to talk to the villagers and after that, she said, “I discovered my mistake.”

In the Kashgar centre, Osmanjan, who declined to give his age, said he had incited ethnic hatred, so village police suggested he go for re-education.

“Under the influence of extremist thought, when non-Muslims came to my shop I was unwilling to serve them,” he said in unsteady Mandarin.

It was not possible to independently verify their stories. All the interviewees said they had not been forewarned of the visit.

Residents said they can “graduate” when they are judged to have reached a certain level with their Mandarin, de-radicalisation and legal knowledge. They are allowed phone calls with family members, but no mobile phones. They are provided halal food.

Only minimal security was visible at any of the three centres.

The situation in Xinjiang has stirred concern in western capitals.

Diplomatic sources told Reuters the ambassadors did not get a response.

The United States has said it is considering sanctions against Chen, other officials and Chinese companies linked to allegations of rights abuses in Xinjiang.

“The fact that they feel they need to put on a show tour is a sign that this pressure is working,” she said.

Both Wang and Dilxat Raxit noted that the tight control over the visits and interviews showed China’s concern about their true nature.

Over a lunch of lamb kebabs, horse meat and naan, Urumqi party boss Xu Hairong said that “all of the reports are fake” when it comes to foreign coverage of Xinjiang. He dismissed worries about US sanctions.

“We, including Party Secretary Chen, are working all out for the people of Xinjiang to have a good life,” Xu said. “If the US won’t allow me to go, then I don’t want to go there. That’s the truth.”

The government says its goal is for Uighurs to become part of mainstream Chinese society. Shohrat Zakir said in parts of southern Xinjiang people couldn’t even say hello in Mandarin.

Officials point to a lack of violence in the past two years as evidence of programme’s success.

Urumqi’s “Exhibition on Major Violent Terrorist Attack Cases in Xinjiang”, normally closed to the public, displays graphic images and footage from what the government says are attacks.

“Only with a deeper understanding of the past can you understand the measures we have taken today,” Shi Lei, Xinjiang’s Communist Party committee deputy propaganda chief, told reporters.

One member of the Chinese armed forces, who has served in Kashgar, said the security situation had improved dramatically.

“You can’t imagine what it was like there in 2014 and 2015. There were attacks all the time, bombings, stabbings. It was chaos,” he said, speaking on condition of anonymity because he was not authorised to speak to the media.

The stations have broader public service in mind, Zhang Yi, commander of one of the stations, told reporters. The one reporters visited provided pamphlets on a wide range of subjects, including how to legally change your sex.

Kashgar deputy party chief Zark Zurdun, an Uighur from Ghulja in northern Xinjiang, where many ethnic Kazakhs live, said that “stability is the best human right”.

“The West should learn from us” on how to beat extremism, he said, dismissing concerns Uighur culture was under attack.

“Did Kazakh vanish in the USSR when they all had to learn Russian?” he said. “No. So Uighur won’t vanish here.” – Reuters