Lula’s campaign falters on the strength of his conviction 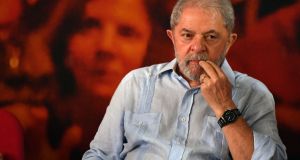 “We can no longer say we live in a democracy and now we only have one path, civic rebellion and civil disobedience,” said Lindbergh Farias, the party’s leader in the Brazilian senate.

In the two weeks since then, massive crowds have filled the streets of Brazilian cities but only because carnival celebrations are under way.

Whatever Brazilians think of Lula’s conviction, which will likely lead to his exclusion from October’s presidential election, the fact is very few are bothered enough to take to the street over it.

It is inadmissible and unacceptable to defy the justice system, to aggravate it or insult it

This failure to mobilise risks exposing the Workers’ Party’s increasingly inflamed rhetoric as a bluff. With the streets full of partiers rather than protesters, there has been institutional pushback against the party’s attempts to undermine the credibility of the country’s judiciary.

“It is inadmissible and unacceptable to defy the justice system, to aggravate it or insult it,” said supreme court president Cármen Lúcia, when opening the new court year last week.

The comments were widely interpreted as a warning to Lula’s defenders to tone it down from what is the country’s final court of appeal and where some of the multiple cases against him are likely to end up.

The former president’s immediate objective is to avoid prison. Amidst the growing judicial confusion in Brazil it is not clear even now when Lula will start his jail time for the conviction. The supreme court has again delayed debating whether having a conviction upheld on appeal is enough for someone to start their sentence.

As insurance Lula’s lawyers are seeking a writ of habeas corpus to prevent his being held in custody, having successfully got him back his passport. This had been taken off him immediately after his conviction was upheld, thus preventing him from travelling to a summit in Ethiopia. Now he has it back some have wondered if he might go into exile.

“The word ‘flee’ does not exist in my life,” rebutted Lula in a radio interview this week. “I will face whatever situation with my head held high.”

He insisted he will contest October’s general elections. But the rejection of his appeal leaves him on the wrong side of Brazil’s “clean record” law barring those with corruption convictions from holding public office.

Despite vowing to run Lula there are hints the Workers’ Party is already working on the assumption his candidacy will be rejected by electoral authorities.

On Monday last, the party’s website posted a note in the name of the party president saying it would not recognise the results of the election if Lula was barred from standing. It then quickly took down the post, which it described as “a production error”.

The party is desperate to have Lula in the contest because he is the clear frontrunner for president and without him it risks a mauling in down-ballot races for governors, senators and federal deputies. The charismatic leader has always been a far greater electoral draw than his party.

The latest opinion poll has Lula on 37 per cent and the winner in all simulated run-off rounds. In contrast, when he is replaced by the party’s likely backup, Jaques Wagner, that support collapses to just 2 per cent.

This legal and electoral fragility is exacerbated by the fact that the broader Brazilian left has spurned Workers’ Party calls for an alliance led by itself.

This has little to do with ethical concerns over Lula’s multiple corruption cases. Leftists have little problem believing his conviction is all part of an elite plot. Rather it is born of frustration at being eclipsed for years by the biggest left-wing movement in the country, which in power was often friendlier towards reactionaries than supposed ideological comrades.

Of the other left-wing candidates, the Democratic Labour Party’s Ciro Gomes is the best placed in the polls on 13 per cent. He has angled to be the left’s standard-bearer should Lula be barred from running. But so far the Workers’ Party shows no sign it would be willing to back anyone from another party.

This fragmented left could belatedly consolidate around a single candidate in a second round run-off. The risk is that without Lula on the ballot, it might not make it that far into the contest. But in Brazil’s endless winter of political discontent, polls show that, with the fascistic former military officer Jair Bolsonaro gaining in support, candidates from the traditional right are also struggling to get that far.