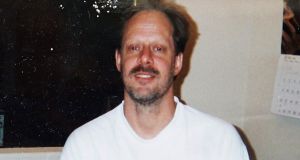 Stephen Paddock, the 64-year-old gunman who killed 58 concertgoers in Las Vegas in October in the worst mass shooting in modern American history, had not had a stroke, brain tumor or a number of other neurological disorders that might have helped explain his actions, a recent examination of the remains of his brain showed.

Paddock’s brain did have changes commonly seen in Americans of his age, including evidence of atherosclerosis - fatty plaques inside blood vessels that can impair circulation, which brain cells rely on to survive. Scattered on the surfaces of his brain were an abnormally high number of tiny deposits that tend to increase with age and accompany some neurological diseases.

The brain examination was conducted by Dr Hannes Vogel, director of neuropathology at Stanford University. Dr Vogel said he was able to perform an adequate evaluation, despite damage caused by Paddock’s fatal, self-inflicted gunshot wound.

“With a good deal of screening, I didn’t see anything,” he said, that could explain why Paddock became a calculating mass killer. Although experts had considered it unlikely that a brain examination would provide answers to what led Paddock to commit a mass shooting, doctors throughout the country had proposed ruling out more than a half-dozen disorders that might possibly be implicated. Dr Vogel found none of them.

There was no evidence of frontotemporal lobar degeneration, which affects “executive functions,” including decision-making and social interactions, and can cause personality changes and unrestrained behavior. That disease would likely have been inconsistent with someone able to engage in meticulous planning.

Paddock had complained to friends of feeling ill, in pain and fatigued, according to a preliminary report on the police investigation released last month. Paddock’s girlfriend, Marilou Danley, told investigators that he had grown more distant over the year before the shooting. The law enforcement report described Paddock as “germaphobic” and strongly reactive to smells.

A primary care physician in Las Vegas, who said he had been Paddock’s doctor since 2009 and had last seen him as a patient roughly a year before the shooting, told officials he suspected Paddock had bipolar disorder. That psychological disorder, however, cannot be identified in a typical post-mortem examination of brain structures. And while some studies have shown that people with bipolar disorder are more likely to have a history of violent behavior than the general public, the majority of them do not, and the relationship between mental health and violence involves many other factors.

The doctor, who was not named in the report, also described Paddock as having behaved oddly, showing little emotion and expressing fear of medications. Paddock had refused prescriptions for antidepressants, but the physician had prescribed anti-anxiety medication for him.

An autopsy report showed he did have anti-anxiety medication in his system, according to the Las Vegas Review-Journal, which obtained the report Friday. The examination showed that the surfaces of Paddock’s brain contained small spheres which can be seen on sections treated with a stain. The structures, made up mostly of carbohydrates but also containing proteins and other components, are known as corpora amylacea. “Most people would have them at that age, but not in that profusion,” Dr Vogel said. “It’s a striking exaggeration of an age-related finding.”

The cause and meaning of the structures remain mysterious, the subject of ongoing research. They appear as people grow older and are found at greater density in the brains of patients with Alzheimer’s disease, multiple sclerosis and epilepsy, among other disorders. Dr Vogel searched for signs of those diseases, but he did not detect them in Paddock’s brain.

Three scientists who study corpora amylacea said in interviews that the increased presence of the structures was significant. “If you have high numbers of these, something’s not normal,” said Troy Rohn, a professor of biology at Boise State University.

Other scientists believe the structures are akin to wastebaskets that contain remnants of broken-down cells or even hazardous substances. Dr Hyman Schipper, a professor of neurology at McGill University in Montreal, said his laboratory’s studies have found evidence that corpora amylacea can result from the damage caused by unstable molecules known as free radicals, which can be unleashed by various stressors. “It’s telling you something and it could be very important,” Dr Schipper said of the finding in Paddock’s brain.

Even so, Dr Vogel, the Stanford neuropathologist, said the results of his examination should reassure the public that Paddock’s doctors had not missed diagnosing a tumor or other major brain disorder that could have been treated. The Clark County coroner’s office had sent 129 brains to Stanford for examination before Paddock’s. Typically they arrive by FedEx, but with heavy public interest in Paddock’s case, the coroner, John Fudenberg, hand-delivered the brain, and Dr Vogel has been asked to return it in person. –New York Times