UN workers estimate that 294,000 Rohingya have arrived in Bangladesh over 15 days 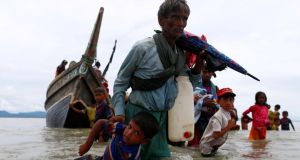 A Rohingya refugee man pulls a child as they walk to the shore after crossing the Bangladesh-Myanmar border by boat through the Bay of Bengal in Shah Porir Dwip, Bangladesh. Photograph: Reuters/Danish Siddiqui

Myanmar on Sunday rebuffed a ceasefire declared by Muslim Rohingya insurgents to enable the delivery of aid to thousands of displaced people in the violence-racked state of Rakhine, declaring simply that it did not negotiate with terrorists.

Attacks by militants on police posts and an army base on August 25th prompted a military counter-offensive that triggered an exodus of Rohingya to Bangladesh, adding to the hundreds of thousands already there from previous spasms of conflict.

According to the latest estimate by UN workers in the Cox’s Bazar region of southern Bangladesh, about 294,000 – many of them sick or wounded – have arrived in just 15 days, putting huge strain on humanitarian agencies’ operations.

Thousands of Rohingya remaining in the northwestern state of Rakhine have been left without shelter or food, and many are still trying to cross mountains, dense bush and rice fields to reach Bangladesh. The Arakan Rohingya Salvation Army (ARSA) insurgent group declared a month-long unilateral ceasefire, starting on Sunday, so that aid could reach these people. The impact of ARSA’s move is unclear, but it does not appear to have been able to put up significant resistance against the military force unleashed in Rakhine state, where thousands of homes have been burned down and dozens of villages destroyed.

ARSA’s declaration drew no formal response from the military or the government of Buddhist-majority Myanmar. However, the spokesman for Myanmar’s leader, Aung San Suu Kyi, said on Twitter: “We have no policy to negotiate with terrorists.” Myanmar says its security forces are carrying out clearance operations to defend against ARSA, which the government has declared a terrorist organisation. Human rights monitors and fleeing Rohingya say the army and Rakhine Buddhist vigilantes have mounted a campaign of arson aimed at driving out the Rohingya, whose population is estimated at around 1.1 million.

About a dozen Muslim villages were burned down on Friday and Saturday in the ethnically mixed Rathedaung region of Rakhine, two sources monitoring the situation said. “Slowly, one after another, villages are being burnt down – I believe that Rohingyas are already wiped out completely from Rathedaung,” said one of the sources, Chris Lewa of the Arakan Project, a Rohingya monitoring group. It was unclear who torched the villages, and independent journalists are not allowed into the area.

In Cox’s Bazar, Reuters journalists saw waves of Rohingya arriving on Sunday, and crowds of desperate people – mostly women and children – queuing for handouts of food and clothes. More than 300 people arrived on small boats and fishing trawlers on Shah Porir Dwip island, a short distance from the mouth of the Naf river that separates the two countries and flows out into the Bay of Bengal. Many collapsed on the beach from motion sickness and dehydration. Three Rohingya were killed by landmines on Saturday as they tried to cross from Myanmar, a Bangladeshi border guard said, and Amnesty International said there were two landmine incidents on Sunday, including a blast that blew off a man’s leg.

“All indications point to the Myanmar security forces deliberately targeting locations that Rohingya refugees use as crossing points,” Tirana Hassan, Amnesty international’s crisis response director, said in a statement. “This is a cruel and callous way of adding to the misery of people fleeing a systematic campaign of persecution,” she said.

A Myanmar military source said last week that landmines had been laid along the border in the 1990s to prevent trespassing and the military had since tried to remove them. But none had been planted recently. Dipayan Bhattacharyya, the World Food Programme’s spokesman in Bangladesh, said the latest estimate of new arrivals was 294,000 and there were discussions under way to revise up the prediction made last week that it would reach 300,000. The government of Bangladesh is planning for an influx of up to 400,000, additional superintendent of police for Cox’s Bazar Afruzul Haque Tutul said.

The UN has appealed for aid funding of $77 million to cope with the emergency in southern Bangladesh. The wave of hungry and traumatised refugees is “showing no signs of stopping”, the UN resident coordinator in Bangladesh Robert Watkins said in a statement late on Saturday. “It is vital that aid agencies working in Cox’s Bazar have the resources they need to provide emergency assistance to incredibly vulnerable people who have been forced to flee their homes and have arrived in Bangladesh with nothing,” he said.

The International Crisis Group said in a report that the strife in Rakhine is causing more than a humanitarian crisis. “It is also driving up the risks that the country’s five-year-old transition from military rule will stumble, that Rohingya communities will be radicalised, and that regional stability will be weakened,” it said.

Aung San Suu Kyi has come under international pressure to halt the violence. Critics say that Ms Suu Kyi, who won a Nobel peace prize for championing democracy, has failed to speak out for a minority that has long complained of persecution. – Reuters