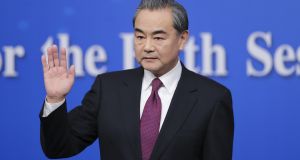 China sought to boost its credentials as a regional peacemaker when foreign minister Wang Yi called on North Korea to stop missile tests in exchange for South Korea ending joint military drills with the US, in an effort to bring the peninsula back from the brink of nuclear crisis.

“The two sides are like two accelerating trains heading for a crash with neither side willing to give way. Are the two sides really ready for a head-on collision?” Wang said during a news conference at China’s annual parliament, the National People’s Congress.

China is struggling to marshal a number of geopolitical problems right now, most of them focused on North Korea, with whom relations are “as close as lips and teeth”, Wang reiterated, but have become strained over its nuclear programme.

Among the fateful issues China is trying to juggle are the apparent murder in Malaysia of leader Kim Jong-un’s half-brother, protests in China over the deployment of the THAAD US missile defence system in South Korea, which Seoul says is in response to the growing nuclear threat from Pyongyang. These threats have been highlighted by North Korea firing four missiles into the sea near Japan this week, in breach of international sanctions, after a series of rocket launches and nuclear tests that have angered the international community and rattled nerves in Asia.

“Our priority is to flash red lights and apply the brakes on both the trains,” Wang said.

To defuse the looming crisis, China could act as a “switchman” to make sure the two sides didn’t crash into each other with disastrous consequences, he said.

Wang was emphatic in restating China’s opposition to the deployment of the THAAD system, which has led to the boycott of the Korean Lotte group, which owns supermarkets in China and which sold a piece of a golf course it owns to site the missile defence facility.

“China urges South Korea to cease on the brink of the precipice and desist and stop the deployment of the US anti-missile system THAAD. Clearly deploying THAAD is a wrong choice. South Korea . . . will only end up hurting themselves and others,” he said.

China previously chaired the long-stalled Six-Party Talks, which included both Koreas, Russia, the US and Japan.

These talks fizzled out and since then the US has regularly accused China of not doing enough to put pressure on North Korea.

Donald Trump is no different in this, having made numerous mentions before and after his election to the need to engage China more in getting the North to forgo its nukes. He has even dangled the possibility of deploying a tactical nuclear weapon there for the first time in decades.

At a state department briefing in Washington, the first public press briefing since the administration took office, a spokesman labelled North Korea a “pariah” and said it would be a central topic for discussion when Wang’s new US counterpart, secretary of state Rex Tillerson, visits China, Japan and South Korea next week.

Wang praised Tillerson as a good listener and a good communicator and reaffirmed China’s opposition to protectionism.

“As long as we act on the consensus reached between our presidents, follow the principle of no conflicts and confrontation, mutual respect and win-win cooperation, there is no reason why China and the United States cannot become excellent partners,” he said.

“There is a compelling reason for China and the US to respect each other . . . our interests are intertwined.”

On Brexit, Wang said China did not subscribe to the view that it would pose a major threat to the EU, and said Beijing was a believer in greater integration.

“We believe the challenges confronting the EU could be an opportunity for the Union to become more mature,” Wang said. “We value the strategic importance and role of Europe. ”

Turning to the Middle East, Wang continued to push the notion of China as peacemaker, saying that Beijing welcomed the imminent visit of King Salman bin Abdulaziz al Saud of Saudi Arabia and wanted to play a “necessary role” in the Middle East peace process, mediating between Israel and Palestine.

Turning to the South China Sea, where China has disputes with Taiwan, Malaysia, Vietnam, the Philippines and Brunei, and has built defensive structures on reclaimed land above coral reefs, Wang said the situation had calmed down “visibly” and said this was good for the region and the world, but he warned the US against interfering.

“If someone is still trying to make waves in the South China Sea, they will have no support and will meet oppositions from all parties,” Wang said.