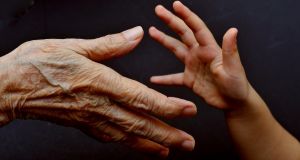 Researchers from Trinity College Dublin examined data relating to people aged more than 70 as care-givers, childminders and active members of society, and considered the economic impact of their potential lack of social interaction during the pandemic. Image: iStock.

A report on the economic and social value of Ireland’s older population has been published due to concerns over a rise of ageist attitudes relating to the coronavirus.

Researchers from Trinity College Dublin examined data relating to people aged more than 70 as care-givers, childminders and active members of society, and considered the economic impact of their potential lack of social interaction during the pandemic.

It found that almost a third of that cohort (29.1 per cent) provide childcare for their grandchildren, at a median rate of 16 hours a month.

Furthermore, 132,000 over 70s (31 per cent) provide care for spouses and relatives other than grandchildren, as well as neighbours and friends.

“We prepared the report because there is a narrative in some of the media, or international public discourse more than Ireland I think, that...70 seems to be a cut off for not being too valuable anymore to society,” explained one of the report’s authors Prof Rose Anne Kenny, head of medical gerontology at TCD and St James’s Hospital in Dublin.

She noted the emergence of some worrying commentary in the UK regarding a “culling” of the “elderly”, with one eye on longer-term economic benefits.

“We would not make the same comments in the context of race or sex, it would not be tolerated,” she said, adding that the current crisis had “unmasked” ageist attitudes.

“We are well aware from our previous work that older persons make a huge contribution to the economy as well as the fabric of society. We thought we should shine a light on that contribution.”

Prof Kenny said that while she believes most of this commentary has taken place in other countries, some of her colleagues have noticed it in Ireland.

The document, published on Thursday and co-authored by sociologists Dr Christine McGarrigle and Dr Mark Ward, and researcher Siobhan Scarlett, draws on data from Tilda, the Irish Longitudinal Study on Ageing.

In relation to childcare services, it found 5.5 per cent of people aged 70 and above (23,400) provided more than 40 hours in a one month period. One in five grandparents aged over 70 provide childcare.

More than 21,000 of those who provide other forms of personal care do so for a median of 25 hours per month, although this is sometimes substantially more.

“The work of volunteers benefits hundreds of thousands of people in all age groups throughout the country,” the report says.

The fact that 330,400 (60 per cent) enjoy regular social and leisure activities means the population is a huge benefit to the economy.

Active and social leisure activities include going to films, plays or concerts; attending classes or lectures; playing cards, bingo, or other games; going to the pub and eating out; taking part in sport activities or exercise.

“Although caring for grandchildren and volunteering may not be taking place at the same volume because of recent restrictions, support structures and assistance for families and communities who rely on the 70 plus generation to provide care will be required. The report helps to inform the extent of this need,” said Dr McGarrigle.