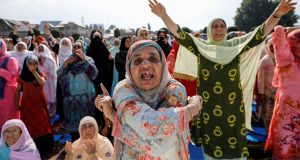 Kashmiri women in Srinagar shout pro-freedom slogans before Eid prayers after the scrapping of the special constitutional status for Kashmir by the Indian government. Photograph: Danish Siddiqui

Indian security forces reinforced their lockdown on Srinagar, the summer capital of the northern disputed Jammu and Kashmir region, during the Muslim festival of Eid on Monday.

The action was designed to forestall any protests against the revocation of Kashmir’s special constitutional rights by India’s federal government last week.

The streets of this bustling city of 1.2 million people were deserted on this Islamic holy day, as – with larger mosques forcibly closed – Muslim worshippers were “encouraged” by armed security personnel in riot gear to offer prayers only at their neighbourhood mosques.

A handful of restrictions that had been temporarily eased over the weekend, permitting a handful of bakeries, sweet and fruit shops to open ahead of Eid, were reinstated on Monday and all commercial establishments summarily closed.

Armed paramilitary personnel manned scores of checkpoints across Srinagar with concertina wire strung out across the streets, dividing neighbourhoods and restricting vehicular movement.

Police vans with armed personnel drove around the city ordering people to go home, and the handful of news channels still relaying news from Srinagar featured nervous locals who said they had never experienced such a “desolate” Eid, bereft of all festivity.

Several Srinagar residents said they had skipped the customary ritual in this Muslim-majority region of slaughtering a male goat or sheep.

“Eid is no fun this year,” teenager Shaukat Khan told the NDTV news channel. “There are too many restrictions on free movement and too many armed personnel around for me to go and play with my friends.”

Since the federal government’s surprise announcement on Monday of last week revoking, after nearly 70 years, article 370, which gave Jammu and Kashmir its special status, a curfew has been selectively imposed across the region. Some 300 political leaders, including two former chief ministers, have been arrested.

The former state has also been bifurcated into the predominantly Buddhist Ladakh region to the north, bordering Tibet, and the region of Jammu and

Kashmir, both of which will be federally governed.

Government officials in Srinagar justified the restrictions on Eid as necessary to keep the peace in Kashmir, especially in Srinaga, and some maintained locals were pleased by their actions as the day was violence-free.

They claimed that to mitigate hardship they had made arrangements to deliver essentials such as milk, vegetables, cooking gas cylinders, poultry and eggs to locals in vans at their doorstep.

India’s national security adviser, Ajit Doval, one of the principal architects behind the government’s decision to scrap article 370, emphasised this alleged feeling of local good will through skilful media management.

Several television news channels and mainline newspapers featured walkabouts by Mr Doval across Kashmir in which he mingled and joked with locals, but always closely shepherded by dozens of armed paramilitaries.

The federal home ministry said “reasonable restrictions” had been imposed in Srinagar, keeping in view “the possibility of terrorists, militants and mischievous elements trying to disturb public order and peace”.

It dismissed reports of stone throwing by locals at the security forces in Srinagar as “insignificant”, and has asked the BBC and Al Jazeera to hand over footage they aired over the weekend of large-scale protests across Kashmir on Friday, featuring over 10,000 people.

The government claims this footage was fabricated, an assertion denied by the two news organisations.

In the meantime, tensions between India and Pakistan, which controls a third of Kashmir and lays claim to the Indian-side of the Himalayan principality, have escalated. The two sides have suspended their daily rail and bus service between the two countries, placed their respective militaries on high alert along their common borders and are trading diplomatic and political threats.

Pakistan’s prime minister, Imran Khan, said Islamabad would seek out mediation from the United Nations Security Council, whose intervention helped end the first of three wars between the neighbours over Kashmir in 1948. India is opposed to any UN intervention.

Mr Khan also alerted his country’s parliament to the possibility of a “conventional war” with India over its actions in Kashmir, while his chief of army staff, Gen Qamar Bajwa, said the Pakistani military would go to “any extent” to support the Kashmiris.

“The Pakistan army firmly stands by the Kashmiris in their just struggle to the end,” Gen Bajwa said.