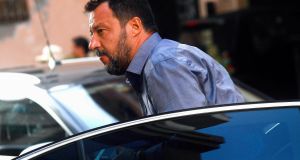 League leader Matteo Salvini’s drive for early elections in Italy hit a road bump on Monday with parliamentary party leaders failing to decide when the Senate should debate his no-confidence motion in the government.

The deeply divided parliamentary leaders ordered the full upper house Senate to break its summer recess on Tuesday to decide for itself on when to hold the vote, which looks set to trigger the downfall of prime minister Giuseppe Conte.

Right-wing Mr Salvini, now interior minister in a year-old coalition with the anti-establishment Five Star Movement, wants to capitalise on his surging popularity in the opinion polls and hold a new election that could see him crowned as prime minister.

But the Five Star and many lawmakers from the opposition centre-left Democratic Party (PD) are furious over Mr Salvini’s manoeuvring and want to slow his charge to the ballot box, saying this will torpedo key bills and damage Italy’s fragile finances.

“You will see that Italians will make the League pay for the stab in the back it has dealt Italy,” Five Star leader Luigi Di Maio said on Facebook.

Mr Di Maio ruled out rumours that he might hook up with former PD prime minister Matteo Renzi to form an alternative coalition. But looking to play for time, both the Five Star and PD said Mr Conte should address parliament on August 20th over the crisis and not August 14th, as the League has demanded.

The Senate will set the calendar for the unprecedented summer political crisis at a session due to start at 6pm (5pm Irish time) on Tuesday.

Italy’s parliament is normally closed for most of August and the country has not held a national election in the autumn for a century because it is the time the government traditionally uses to draw up the budget – an elaborate, time-consuming process.

The anti-EU Mr Salvini said this year that he wanted to break free from the pro-European Mr Berlusconi. However, Forza Italia politicians could try to use their numbers in parliament to block any rush to early elections if Mr Salvini spurns them.

Mr Salvini, photographed at the weekend posing for shirtless selfies with supporters at the beach, has dominated Italian politics since forming a government with Five Star.

However, some League voters have been dismayed by his decision to sink the government and have voiced dissent on social media. Mr Salvini was booed and heckled during campaign stops in Sicily on Sunday. – Reuters