Residents in Mosul, still traumatised by violence, fear a resurgence of the terror group 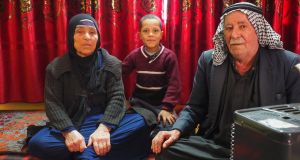 Khalaf and Barnu Al-Hadedi with their grandson in their living room in the Al-Nabi Younis neighbourhood of Mosul. Photograph: Lorraine Mallinder

Not many outside Iraq will have heard of Rifat Chadirji. The father of modern Iraqi architecture died in London last month, after contracting coronavirus. Among the many buildings this Baghdad-born disciple of Le Corbusier designed was the seven-storey National Insurance Company in Mosul.

Avant-garde with traditional flourishes, the iconic building went up in the 1960s, reflecting the optimism of more prosperous times in the oil-rich city. Fifty years later, Islamic State was throwing gay men from its rooftop, dangling them by the ankles, dropping them head-first to their deaths.

Before staging the executions, the terror group would order locals to gather round. “They forced them to watch, so they would be powerless and afraid,” says Mahdi Salih Marie, a history lecturer at the University of Mosul. The grim irony of this symbol of progress being used to enforce a depraved interpretation of 7th-century Islam is not lost on him.

An AP investigation found that up to 11,000 civilians died in the battle to retake the city

The building is gone now. Torn down by the authorities last year, all that remains is a hole filled with rubble and rusting rebar near the Old City. The question of what might replace it is the last thing on the minds of the city’s traumatised residents, whose efforts to rebuild their lives have been crippled by massive corruption – the same sort that exists in the rest of Iraq, amplified by post-war anarchy.

Islamic State’s reign took a shocking toll on Moslawis. Having been held hostage in their city between 2014 and 2017, they paid in blood for their liberation, caught between their ultra-violent captors and the coalition bombs that rained down upon them over the nine months it took to dislodge the militants. An AP investigation found that up to 11,000 civilians died in the battle to retake the city, though many believe the figure to be much higher.

“We got rid of the barbarians, but we lost heavily,” says Ahmed Namiq Salim, a 35-year-old tailor, working at al-Quds market on the east bank of the Tigris. His factory on the other side of the river was destroyed during liberation. Now he is scraping together a living, hoping for better days. Like everyone else, he knows that the terror group is still present, hidden in the cracks and seams of city life.

Sitting at home in the al-Nabi Younis neighbourhood, Khalaf al-Hadedi (70) shakes his head in disbelief, as he remembers how easily Islamic State, also known as Isis, captured the city in 2014. It took only 1,500 or so marauding jihadis to send 30,000 US-trained Iraqi soldiers packing.

Many local Sunnis, angry at how they had been treated by the Shia-led government of Nuri al-Maliki, welcomed them. “I was shocked at how many people became loyal to Daesh,” he says, using another name for the group.

In the early days of the occupation, the roads out of town were still open. But al-Hadedi and his wife, Barnu, stayed put, convinced – as were many locals – that the US would step in. After all, weren’t they waging a war on terror? By the end of 2014, the city borders were sealed shut. During the nightmarish years that ensued, their 26-year-old son, Ahmed, was shot after being found with a mobile phone – banned under the caliphate.

In the months before the virus hit, the group had regularly been carrying out hit-and-run attacks

Could it happen again? Al-Hadedi thinks it isn’t over yet. Like many locals, he believes the US started the trouble – by invading in 2003 and disbanding the Iraqi army, chasing out the Sunni top brass of Saddam Hussein’s regime, many of whom allied themselves with the insurgency that would mutate into Islamic State. Yet he still believes that the US should stick around to sort it out. “If America leaves, we are ruined,” he says.

It’s a moot point. US troops, who form the bulk of coalition forces training the Iraqi army to fight IS, have been unwelcome of late, amid escalating tensions with Iran-backed militias known as the Hashd-al-Shaabi. Earlier this year, after the US assassinated top Iranian general Qasem Soleimani and a local militia leader near Baghdad airport, the Iraqi parliament voted to kick foreign troops out of the country. Iran’s proxies have since stepped up their attacks. In parallel, the US has withdrawn from some frontline bases.

Coronavirus has complicated matters, with a number of coalition members fully or partially suspending operations. For Islamic State, socially distant in the lawless zones between Kurdish Peshmerga and Iraqi army positions, the pandemic is the perfect opportunity for a comeback. An editorial last month in the group’s al-Naba newsletter – translated on the website of British researcher Aymenn Jawad al-Tamimi – celebrated the virus as “the worst nightmares of the Crusaders”.

In the months before the virus hit, the group had regularly been carrying out hit-and-run attacks, abductions and assassinations in northern Iraq. According to Pentagon estimates last year, as many as 18,000 militants are active in Syria and Iraq. A recent report on US military operations against Islamic State, published in February, said the death of former leader Abu Bakr al-Baghdadi, in a US raid in October 2019, has not perturbed the functioning of the terror group, which has a war chest of hundreds of millions of dollars.

In Mosul itself, Islamic State loyalists are lying low. One high-ranking officer in the Iraqi army, who oversees security around Nineveh Province, told The Irish Times that as many as 2,000 Isis sympathisers are still inside the city.

“Their most prominent leaders are in jail or killed or ran away,” he says. “Even if they wanted to be a danger, they don’t have the tools to achieve this. They are too dispirited to take action.” However, as he says, the army’s mission of clearing the city of Islamic State’s presence has not yet been achieved.

It’s incredible. One million books they burned. But we are rebuilding everything

Rights groups claim that fear of an Isis comeback has led to an excessively brutal crackdown that could backfire, reporting arbitrary arrests and use of torture in Iraqi prisons housing suspected militants. Thousands of Islamic State suspects are being held in the three prisons around Mosul, non-combatants and hardened killers thrown together in overcrowded and degrading conditions, with no access to lawyers. Razaw Salihy, a researcher at Amnesty International, warns that this could harden minds, helping to fuel an Islamic State revival.

It all smacks of US-run prisons Abu Ghraib – notorious for its horrific abuse of prisoners, revealed in 2004 – and Camp Bucca, which gained a reputation as a jihadi academy, eventually birthing Islamic State. It was at Bucca that al-Baghdadi formed a close bond with Amir Mohammed Abdul Rahman al-Mawli, a former Saddam-era military officer who would help him take Mosul, succeeding him as leader when he died last year.

As the group’s chief legislator, it is thought that al-Mawli himself may have decreed that homosexuals be thrown from rooftops. Nicknamed “The Professor”, the religious scholar allegedly issued the fatwa that underwrote the murder and enslavement of thousands of Yazidis.

Al-Mawli, originally from nearby Tal Afar, studied sharia law at the University of Mosul. His alma mater was devastated by the occupation. Militants had a bonfire in the library, destroying one million books, some dating back centuries – including a Koran from the ninth century. Unesco called it “one of the most devastating acts of destruction of library collections in human history”.

The university is attempting to lead the city back towards the light. “It’s incredible. One million books they burned. But we are rebuilding everything,” says the dean, Kossay al-Ahmady, eyes glittering with determination. He’s promoting the arts, appointing women to senior positions and attracting minorities such as the Yazidis to the university, moves that are completely antithetical to what Islamic State stands for. “If the university doesn’t change minds, who will?” he says.

Once work on the library gets under way, he intends to preserve the hall in its charred state. “We will leave it burned, symbolic of this period,” he says.

“I don’t want people to forget.”