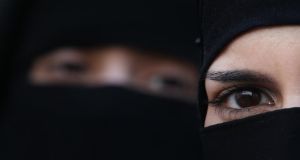 Niqab ban: Belgium was entitled to impose restrictions to ensure the principles of “living together”, according to the European Court of Human Rights. Photograph: Peter Macdiarmid/Getty

Banning the niqab and other full-face veils does not breach human-rights law, the European Court of Human Rights has ruled in two cases.

The judges found on Monday that Belgium’s ban on partially or fully covering the face in public, which was introduced in 2011, was legal under the European Convention on Human Rights. They said the country was entitled to impose restrictions to try to ensure the principles of “living together” and protect “the rights and freedoms of others”.

The seven judges at the Strasbourg court dismissed a challenge by two Belgian Muslim women, Samia Belcacemi and Yamina Oussar, who had argued that the prohibition denied them freedom of religion and respect for their private life.

Ms Belcacemi, from Brussels, stopped wearing the veil after the ban in case she was fined or imprisoned. Ms Ousser, from Liège, said she stopped going out in public.

In the second case, the court rejected an appeal brought by another Belgian woman, Fouzia Dakir, over bans that three municipalities introduced in 2008. It again found the bans had not denied her freedom of religion or respect for her private life.