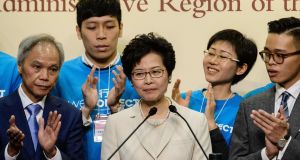 Civil servant Carrie Lam has been chosen as Hong Kong’s first female leader after an elite election committee weighted in Beijing’s favour gave her a landslide win against a background of rising political tension in the city.

There were three candidates in the running for choice by a 1,194-person “election committee” composed of pro-Beijing businesspeople, professionals and politicians that selects leaders for the former crown colony and the former chief secretary’s victory had been widely expected.

“The work of uniting society and moving forward begins now,” Ms Lam said after the result was announced, saying she had “no fears” about defending Hong Kong’s interests to Beijing.

“Hong Kong, our home, is suffering from quite a serious divisiveness and has accumulated a lot of frustration. My priority will be to heal the divide and to ease the frustration – and to unite our society to move forward,” she said, as quoted in the South China Morning Post.

She did not say whether she would push for more democracy. “I too want more democracy in Hong Kong. But Hong Kong is facing a lot of problems. Why don’t we start with the easier subjects first?” she said.

Hong Kong has remained deeply politically divided since the Umbrella Movement that led to large parts of the city being occupied by pro-democracy demonstrators in 2014.

There are more than 3.7 million registered voters, but the overwhelming majority of Hong Kong people have no say in choosing their leader.

Ms Lam (59) will replace the unpopular Leung Chun-ying, who famously ordered the firing of tear gas on protesters during the Occupy demonstrations.

He bowed out in December but opposition democrats are concerned Ms Lam will carry on his pro-Beijing policies and will not defend Hong Kong’s autonomy and core values.

Since the protests there have been growing calls for greater self-determination for Hong Kong, and fears for the territory’s cherished autonomy after a series of events, including the arrest of five Hong Kong booksellers, who vanished into Chinese police custody in 2015.

Beijing has watched developments in Hong Kong with alarm and sees rising calls for more autonomy as a threat to stability.

There were scuffles outside the Convention Centre in Hong Kong as the votes were counted, with activists chanting for universal suffrage for the territory of 7.3 million people and carrying banners saying “lies, coercion, whitewash”.

Earlier, a large yellow banner calling for democracy for Hong Kong was unfurled from the Lion Rock peak in Kowloon which overlooks the city.

“There have already been smaller protests today, and more in the upcoming Easter holidays. Most of these rallies will be reactive. The ball is now on Lam’s side of the court. I’m expecting a resurgence of localism and the pro-independence movement,” Mr Ng told The Irish Times.

These movements calling for more autonomy or independence for Hong Kong have both become calmer since CY Leung announced he would not stand again. “But they will make a comeback with Lam’s win. It’s a case of ‘action and reaction’,” said Mr Ng.

Hong Kong’s economy has benefited from its close links to China, but increased investment from the mainland in the real estate market is blamed for a housing shortage and has put pressure on services.

Ms Lam hails from a relatively humble background in the city’s Wan Chai district and she has a reputation as a safe pair of hands and a competent civil servant.

1 When the RIC opened fire on a crowd in Ennis during the Clare grain riots
2 Portraying Sinn Féin as a dangerous party is a political strategy
3 Coronavirus: Almost 60 new cases recorded in Italy as two die
4 Shannon at high risk of flooding as rainfall warning issued for most counties
5 Bernie Sanders cements lead in Democratic race after win in Nevada
Real news has value SUBSCRIBE