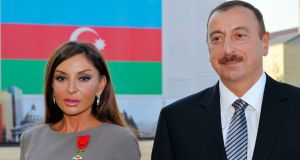 Mehriban Aliyeva and Ilham Aliyev: The Azerbaijan president has named his high-profile wife “first vice-president”, allowing her to assume power if he dies or becomes incapacitated. Photograph: Philippe Wojazer/AFP/Getty Images

The authoritarian president of Azerbaijan has named his wife first vice-president in the latest move by the country’s oil-rich ruling dynasty to cement power.

President Ilham Aliyev announced the promotion of his wife, Mehriban, at a meeting of the Azerbaijan security council on Tuesday, describing her as a “professional, experienced and principled person” as well as a “humanitarian”.

Ms Aliyeva has been a member of parliament since 2005 and heads the influential Heydar Aliyev Foundation, a charity dedicated to preserving the memory of her father-in-law, who was Azerbaijan’s former president.

Mr Aliyev said his wife had for many years played an important role in social, political, cultural and international affairs. “I was guided by these factors when taking the decision to name her as first vice-president of Azerbaijan,” he said.

While most first ladies in the former Soviet Union take a back seat role, Ms Aliyeva has pursued a diversified career not only as a parliamentary deputy but as a cultural ambassador and organiser of charitable trusts.

An eye doctor by training, she is a member of Azerbaijan’s powerful Pashayev clan, which, peopled for decades by distinguished academics and statesmen, has accumulated huge political influence and wealth during her husband’s 13-year rule.

Ms Aliyeva’s political status has been rising since she was named in 2013 as deputy head of her husband’s YAP Party, which holds the majority of seats in parliament. Her appointment as first vice-president, a post introduced after a 2016 referendum, elevates her further to the post of second most senior official in the country.

According to the new rules, the first vice-president assumes leadership of the country if the president dies or becomes incapacitated.

Mr Aliyev (55), who in 2013 won a third term in an election condemned by international observers as unfair, shows no signs of planning to surrender power. A controversial constitutional amendment adopted shortly before the latest election abolished restrictions on the number of terms a president can serve, clearing the way for the leader to rule for his lifetime.

In public the Aliyevs, who have three children, present as a strong family team, with Ms Aliyeva (52) occasionally demonstrating a softer side to the regime. An amnesty proposed by the first lady last year allowed 3,500 prisoners convicted of minor crimes to walk free.

Known for her love of luxury, Ms Aliyeva has made a poor impression on US diplomats, whose comments were released by WikiLeaks.

“First Lady Mehriban Aliyeva appears to have had substantial cosmetic surgery, presumably overseas, and wears dresses that would be considered provocative even in the western world,” according to one state department cable leaked in 2010.