Austria clears extradition of Ukrainian oligarch to US 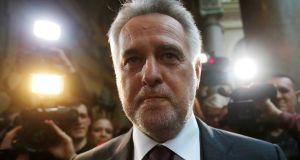 Ukrainian oligarch Dmytro Firtash: made a fortune selling Russian gas to Ukraine before being arrested in Austria in March 2014. Photograph: Heinz-Peter Bader/Reuters

An Austrian court has ruled that one of Ukraine’s richest men, Dmytro Firtash, can be extradited to the United States on corruption charges the Russia-linked tycoon has called politically motivated.

The verdict in Vienna came as Ukrainian prosecutors announced a treason investigation into Andrei Artemenko, a deputy who claims to have offered US president Donald Trump a secret plan to end a Russian-fuelled separatist conflict in eastern Ukraine.

A US grand jury indicted Mr Firtash in 2013 on suspicion of bribing officials in India to facilitate a mining project there, but he claims he is being pursued due to his influence in Ukraine and powerful friends in Moscow.

The so-called oligarch made a fortune selling Russian gas to Ukraine before being arrested in Austria in March 2014, just weeks after street protests ousted his erstwhile ally, Viktor Yanukovich, as Ukrainian president.

Mr Firtash (51) posted bail of €125 million and, though barred from leaving Austria, he continued to wield clout in his homeland, reportedly meeting Petro Poroshenko and Vitali Klitschko to broker a deal between the rivals ahead of Ukraine’s 2014 presidential election.

Mr Klitschko gave way and became mayor of Kiev, and Mr Poroshenko won the election and is still president. Both men – along with many other powerful people in Ukraine and Russia – may feel uncomfortable over what Mr Firtash could reveal to the US authorities if Austria does extradite him.

The tycoon’s fate could also add to controversy around Mr Trump’s links to Russia and Ukraine: his former campaign manager, Paul Manafort, was a spin doctor for Mr Yanukovich and part of a consortium that planned to redevelop New York real estate with Mr Firtash.

Mr Firtash’s five-man legal team, led by former Austrian justice minister Dieter Boehmdorfer, told the court the US wanted to sideline their client as part of a strategy to reduce perceived Russian influence in Ukraine.

“We must not allow Austria to become a stooge for the political world power, the USA,” Mr Boehmdorfer argued, much as he had in 2015 when an Austrian court rejected the US extradition request.

In a higher court on Tuesday, however, the judge said the US had provided further evidence to strengthen its case, and insisted Mr Firtash would receive a fair trial if Austria extradited him.

Anton Gerashchenko, an adviser to Ukraine’s interior minister, said “the Americans [might] offer Firtash the chance of freedom in exchange for evidence linking Russia’s top leadership to corrupt schemes”.

Shortly after the Vienna court delivered its verdict, Austrian police took Mr Firtash back into custody on a separate European arrest warrant issued by Spain, where he is suspected of money-laundering.

In Kiev, prosecutors announced a treason investigation into Mr Artemenko, who claims to have delivered a plan to the Trump administration that would see Ukraine lease Crimea to Russia for 50 or 100 years in exchange for regaining control of parts of eastern Ukraine now run by Kremlin-backed separatists.

Ukrainian officials denounced the plan, and Russia said it would not pay for a peninsula that it annexed in 2014.

In eastern Ukraine, where about 10,000 people have been killed in almost three years of war, fighting was less intense than in recent days but a full ceasefire and withdrawal of heavy weapons due to start on Monday had yet to begin.

Meanwhile, activists who condemn trade with the separatist forces continued to prevent coal supplies crossing the front line, despite warnings from Kiev, the US and European Union that the blockade could trigger an energy crisis and cripple industry.