Debate over state visit triggered by petition against US president’s visit signed by 1.8m

A lively debate saw some British MPs condemn US president Donald Trump, while others suggest the UK's special relationship with the US is more important than the man who holds the office of president. Video: Reuters 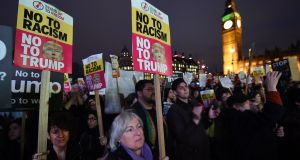 Protesters demonstrate against the proposed state visit to the UK of US president Donald Trump outside parliament in London on Monday night. Photograph: Andy Rain/EPA

British MPs lined up on Monday to pour scorn on a “racist and sexist” Donald Trump, who they said should not be allowed to come to Britain for a state visit because of the risk it would embarrass Queen Elizabeth.

The US president was compared to a “petulant child” and had his intelligence questioned by MPs during a three-hour debate triggered after more than 1.8m people signed a petition urging Theresa May to cancel her invitation.

So many politicians packed into Westminster Hall for the debate that they had to have their speeches limited to five minutes each.

Alex Salmond said he was unsure over whether to be appalled by the morality of the invitation or astonished by its stupidity.

“As an example of fawning subservience, the prime minister holding hands [with Trump] would be difficult to match,” the former Scottish first minister said. “To do it in the name of shared values was stomach churning. What exactly are the shared values that this house, this country would hope to have?”

Labour’s Paul Flynn said that only two US presidents had been accorded a state visit to Britain in more than half a century and it was “completely unprecedented” that Mr Trump had been issued his within seven days of his presidency.

Mr Flynn – who started the debate because he is on the petitions committee – said Mr Trump would hardly be silenced by the invitation being rescinded, accusing him of a “ceaseless incontinence of free speech”.

Asked by Caroline Lucas, co-leader of the Green Party, if Mr Trump’s views on climate science should also be taken into account, Mr Flynn responded that the president had shown “cavernous depths of scientific ignorance” on the issue.

They were speaking as thousands of demonstrators descended on Parliament Square to protest against the visit, chanting and waving placards reading “no to racism; no to Trump”. The shadow home secretary, Diane Abbott, addressed the crowds, as did Lucas – who emerged from the debate to describe Trump as a “bully and a bigot”.

‘Pimping out the queen’

Inside the chamber, Mr Flynn was criticised by a Conservative MP when he quoted the Observer’s Andrew Rawnsley, who has described the visit as the government “pimping out the queen for Donald Trump”.

Jacob Rees-Mogg responded that it was out of order “to refer to pimping out our sovereign” and argued that no one had complained when Emperor Hirohito came on a state visit to the UK, who he said was responsible for “the rape of Nanking”.

Mr Rees-Mogg was one of a number of Tories to defend both the president and Ms May for issuing a state visit. Nigel Evans, MP for Ribble Valley, warned against sneering at the 61 million Americans who voted for the president, describing them as “the forgotten people”.

Adam Holloway, Conservative MP for Gravesham, said that while Mr Trump’s travel ban on people from seven Muslim-majority countries was absurd, it was “rather refreshing” to see a politician actually do what they had promised. Crispin Blunt, who chairs the foreign affairs committee, said the queen would be embarrassed if the invitation was now withdrawn.

Edward Leigh, Conservative MP for Gainsborough, told colleagues that he was going to make a “difficult argument” and then claimed that Mr Trump’s racism and misogyny had been overstated. “Which one of us has not made some ridiculous sexual comment at some point in his past,” he said, prompting an angry response from female MPs.

A number of female MPs stood up to complain of Trump’s sexism, with Paula Sherriff, Labour MP for Dewsbury and Mirfield, quoting his infamous “grab her by the pussy” comment, which she said was sexual assault.

Rushanara Ali, Labour MP for Bethnal Green and Bow, urged the prime minister to remove her invitation because of the “damage to the queen” of the association. Naz Shah, Labour MP for Bradford West, said she had once urged Mr Trump to come to her constituency to share a curry and meet a Muslim chief superintendent, headteacher, health workers and so on.

“But to do so now that he is president will only reinforce his actions, his divisive racist and sexist messages. This flies in the face of everything we stand for. We cannot support what he is doing,” she said.

David Lammy, the Labour MP for Tottenham, warned that African Americans were afraid of the presidency, saying Mr Trump was supported by the Ku Klux Klan and had white supremacists in his inner circle.

Mr Salmond also said that Mr Trump would not have forgotten previous insults of him by the prime minister, and said that his experience of dealing with the former reality television star, who owns golf courses in Scotland, showed Ms May was in a difficult position.

“From my experience negotiating with Donald Trump, never, ever do it from a weak position because the result will be a total disaster.”

However, those close to ministers made clear that there would be no rowing back on the invitation to Mr Trump and hit out at MPs. “It would be interesting to see how much time and public money was wasted on today’s debate – it achieved nothing apart from offering some, who have nothing better to do, the opportunity to grandstand. The British people will be more interested in the important debate in the Lords on Brexit,” said a government source.