All eyes on China after Kim-Trump summit raises questions 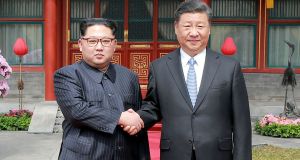 With Kim Jong-un and Donald Trump having departed Singapore after their landmark summit, attention now turns to China to see if it will continue to uphold economic sanctions on North Korea in coming months.

During the post-summit news conference, Trump was full of praise for President Xi Jinping, but also hinted that China was loosening its restrictions on trade with North Korea.

“A very special person, President Xi of China has really closed up the [China-North Korea] border maybe a little less so over the last couple of months – but that’s okay,” he told reporters, suggesting that economic sanctions might start to be relaxed to reflect the warmer political atmosphere.

By opting to abandon joint military exercises, or “war games” as he dismissively called them, with South Korea in exchange for pledges to denuclearise, Trump has agreed to a “freeze-for-freeze” solution long vaunted by China and equally long dismissed as an option by the White House.

It is precisely the kind of vague, loose definition of denuclearisation that China would have wanted.

At the moment it looks like China will continue to comply with the full United Nations Security Council resolutions, but a third meeting between Kim and Xi looks very much on the cards in the near future as China tries to ensure it maintains its influence in a country that is economically dependent on it and where it has strong strategic interests.

China is also host of the six-party talks including both Koreas, Russia, Japan, the US and China, which stalled in 2009.

Should China not comply fully with the implementation of resolutions, as Trump suggests, and start providing unilateral support, there could be conflict ahead, especially as China and the US have their own trade issues to resolve.

Srinivasan Sitaraman, a political science professor at Clark University, believes one of the big winners from the summit is China, “which has already called for easing of sanctions against North Korea and Russia will issue a similar call when the Kim-Putin summit happens.”

Paul Haenle, a former White House national security council official who now runs the Carnegie-Tsinghua Centre for Global Policy in Beijing, believes Kim will be making the trip to Beijing in his special train again soon.

“We should not be surprised if another Kim-Xi meeting occurs in the not-too-distant future, as ultimately China is focused on maintaining its influence and leverage in North Korea and any future developments on the Korean peninsula,” he said.

There were interesting comments about the language of the deal from South Korean experts, especially the phrase “complete denuclearisation”.

“I believe the expression, ‘complete denuclearisation’ should be seen as tantamount to CVID,” Koh Yoo-hwan, a professor of North Korean studies at Dongguk University, told Yonhap news agency.

“Pyongyang, as is widely known, has been strongly averse to that expression. The fact that such a declaratory expression is not included does not mean that denuclearisation will not take place,” he said.

After years of radio silence on disarmament, no speedy resolution can be expected on either a bilateral or a six-way basis. To build trust between countries that have been enemies for seven decades is going to take time.