South seeks clarification after summit between US and North Korean leaders 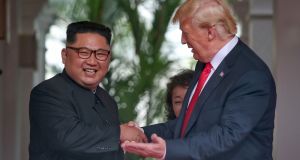 US president Donald Trump hailed a landmark deal with North Korean leader Kim Jong-un yesterday, as the one-time foes signed a joint statement pledging to work towards denuclearisation of the Korean peninsula.

But as the US president left Singapore, key questions remained about implementation of the agreement, and whether the United States had gained anything substantive from the summit.

In particular, Mr Trump’s announcement that joint military drills with South Korea would be suspended took many onlookers by surprise – including South Korea, it seemed.

A spokesman for the South Korean foreign ministry said that the “meaning and intention” of Mr Trump’s remarks required “more clear understanding”. There were concerns that by cancelling the joint exercises, which the North Koreans label “grave provocations” and a precursor to war, Mr Trump may have made too large a concession.

It was unclear if the next joint exercise – which is scheduled for August – would go ahead as planned.

In a lengthy press conference after a morning of talks and a working lunch, a delighted Mr Trump hailed a “fantastic” meeting with Mr Kim, who he described as “a talented man who loves his country very much”.

“Our unprecedented meeting proves that change is possible . . . we’re ready to write a new chapter between our nations,” Mr Trump said, adding that the two leaders had developed a “very special bond”.

In Kim he trusts

Speaking at the signing ceremony, Kim Jong-un said: “Our countries will leave the past behind. The world will see a major change.”

During his hour-long press conference, Mr Trump made regular references to the failure of previous administrations to engage in dialogue with the Pyongyang leadership and highlighted his own ability as a deal-maker. “All I can say is they want to make a deal. That’s what I do. My whole life has been deals. I’ve done great at it, and that’s what I do. And I know when somebody wants to deal, and I know when somebody doesn’t. A lot of politicians don’t. That’s not their thing, but it is my thing.”

While previous administrations have entered peace talks with North Korea, they have ultimately collapsed, mainly because of North Korea’s noncompliance with the terms of the agreements.

Asked if he could be sure North Korea would implement the agreement, Mr Trump later told ABC that he trusted Kim Jong-un. “I think he trusts me, and I trust him,” he said.

He also told reporters that US sanctions would remain in place until there was verification of denuclearisation.

As the summit concluded, US secretary of state Mike Pompeo was due to fly directly to Beijing from Singapore for talks.

Mr Trump said he would invite Mr Kim to the White House “at the appropriate time”, though he said it was too early to discuss establishing diplomatic relations.

Both Mr Kim and Mr Trump left Singapore soon after the summit, held at the colonial-era Capella building on Sentosa island. Earlier, the gathered press corps emitted a collective “wow” as the two leaders shook hands in front of a sea of North Korean and American flags.

The two men also conversed as they walked through the tropical garden of the hotel, and Mr Trump showed Mr Kim his huge armoured Cadillac. He also appeared to indicate the government official who carries the football containing the nuclear codes.