After the Dalai Lama: How China is trying to take control of his succession 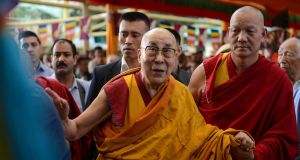 China’s atheist Communist Party is gearing up to dictate who will be reincarnated as the next Dalai Lama, a move that is deeply disturbing to many Tibetan Buddhists and one that is drawing international condemnation.

At 84, the Dalai Lama is reported to be in good health, but he was hospitalised recently for a chest infection and he has significantly reduced his trips abroad this year.

When a Dalai Lama passes, senior Tibetan monks traditionally engage in a ritualistic search based on spiritual signs and visions to select as his reincarnation a young boy born around the time the last spiritual leader died. But as the 14th Dalai Lama enters his twilight years, Beijing is stepping up efforts to control his succession.

In August, the Communist Party held a “training session on reincarnation for a living Buddha” for more than 100 Buddhist monks from 73 monasteries, where they studied “government management of the reincarnation system”, state media reported.

At the training, a senior government official stressed the government’s view that “the reincarnation system is never a religious-only issue or a Buddha’s personal right” but was “an important representation of the Communist Party of China’s strategies and policies in the region”.

In 2016, Chinese president Xi Jinping launched a campaign to “Sinicise” the five state-recognised religions – Buddhism, Taoism, Islam, Catholicism and Protestantism – “to actively guide the religious to love their country, protect the unification of the motherland and serve the overall interests of the Chinese nation”.

At the recent meeting, the Communist Party’s leader in Tibet, Wu Yingjie, stressed the importance of the “Sinicisation” of Tibetan Buddhism, and said its followers should integrate their religion with Chinese culture, align it with the party, and take Mr Xi’s “new era of socialism with Chinese characteristics as the guide”.

China issued regulations in 2007 governing the “management of the reincarnation of living Buddhas” to “better integrate the traditional modes of management into new Communist Party methodologies”. Under these regulations the government maintains a database of “legitimate” incarnated Buddhas and isolates any Lamas who they feel are not supportive of the party-state.

A Tibetan academic, who asked not to be named due to the sensitivities involved, said that to get on the reincarnation database, monks had to go through an arduous indoctrination process, where they were trained to promote love for the party and social harmony, and fight against the Dalai Lama and other “splittists”.

“The Tibetan reincarnates are becoming Communist-trained talents rather than religious leaders,” he said. “As the party is using them in this way, it creates a distance between reincarnate Lamas and ordinary Buddhist believers.”

On the issue of reincarnation, the Dalai Lama has said in recent years that only he can decide on issues relating to his own succession and he accused the Communist Party of “brazen meddling” and revealing double standards that contradict their own political ideology.

“The person who reincarnates has sole legitimate authority over where and how he or she takes rebirth and how that reincarnation is to be recognised,” he said. “It is a reality that no one else can force the person concerned, or manipulate him or her.”

The Dalai Lama has lived in exile in India since fleeing an aborted uprising in 1959, and is reviled by China, which accused him of being a separatist and a “wolf in monk’s clothing”. The Nobel Peace Prize winner does not publicly advocate for Tibetan independence, but does push for greater religious and political autonomy for the province that Beijing governs with an extremely tight grasp.

In efforts to wrong-foot China, he has said he might decide that he will be the final Dalai Lama, or that his reincarnation might be female, or be born in India away from China’s control.

In 1995, the Dalai Lama named a six-year-old boy, Gedhun Choekyi Nyima, as the reincarnation of the Panchen Lama, the second highest spiritual authority in Tibetan Buddhism, but the Chinese authorities took him into “protective custody” and installed another boy, Gyaltsen Norbu, in his place.

Most Tibetans to do not recognise or accept the replacement Panchen Lama, but pledge loyalty to the Dalai Lama’s choice, who has not been seen in public for 24 years.

The Chinese-installed Panchen has featured prominently in recent months in Chinese state-run media on official tours in Tibet and abroad, increasing concern among Tibetans that Beijing is boosting his profile now to pave the way for him to play a pivotal role in the Dalai Lama’s succession.

Earlier this month, Kai Mueller from the Helsinki Foundation for Human Rights urged the UN Human Rights Council in Geneva to request information from China about disappeared Tibetans, in particular the 11th Panchen Lama.

“For many Tibetans, Gedhun Choekyi Nyima’s disappearance has come to symbolise the Chinese government’s efforts to interfere with and undermine Tibetan Buddhist culture,” he said. “His enforced disappearance also constitutes a grave violation of international human rights standards.”

In response, China said the Dalai Lama’s selection of a Panchen Lama was “illegal and ineffective” and was “in total disregard of religious rituals and historical conventions”.

A government spokesman said the man originally declared as the Panchen Lama was living a normal life and “does not want to be disturbed”.

“The reincarnation of living Buddhas, including the Dalai Lama, must follow religious ritual and historical conventions and comply with Chinese law and regulations,” he said.

As China ramps up its efforts to control the selection of a new Dalai Lama, US lawmakers are promoting a Bill that would increase US support for Tibet.

The draft Tibetan Policy and Support Act of 2019, which goes to the Senate next week, would make it official US policy that the succession of the Dalai Lama and other Tibetan Buddhist leaders are exclusively religious issues that the Tibetan Buddhist community should decide on. Under the Bill, any Chinese officials who attempt to interfere in the process would be subject to targeted sanctions.

The Bill, which has bipartisan support, also says no new Chinese consulates should be allowed in the US until a US consulate is opened in Lhasa, Tibet’s capital.

Matteo Mecacci, president of the International Campaign for Tibet, welcomed the proposed legislation, saying the Dalai Lama’s succession “represents a key test for the respect of religious freedom worldwide and is therefore vital to US national interests”.

The succession issue is expected to ratchet up tensions in a region that is already under massive police and military control. More than 150 Tibetans have burned themselves to death over the past decade in protest against China’s rule.

As they went up in flames, many used their last words to call for the Dalai Lama’s return to Tibet.