Twenty-five years after the end of a rabies-inspired ban, dog ownership is booming 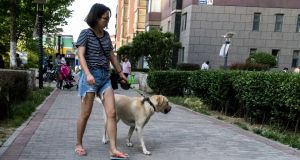 Officially there are 2.5 million registered dogs in Beijing. Photograph: Getty

Through Beijing’s ancient hutong laneways and along the traffic-thronged ring roads, an assortment of long-term residents, young office workers and small families are doing something that was unthinkable 25 years ago.

They are taking their dogs for a walk.

Between 1983 and 1993, dogs were banned in China because of the tens of thousands of deaths caused by rabies, and before that, chairman Mao Zedong’s Red Guards slaughtered pets, regarded as a bourgeois luxury, during the ideological tumult of the Cultural Revolution (1966-76).

Legislation has been gradually relaxed in the past few years, and there has been a surge in pet ownership in China as the country gets richer. There are an estimated 180 million dogs nationwide, and 220 million cats, and pet owners are set to spend €6 billion on looking after their pooches and moggies by 2022, nearly three times last year’s figure.

In the Beijing district of Wangjing, proud owners are out for an early-evening stroll with their pooches – Dalmatians, Poodles, Alsatians and the current favourite breed, Border Collies. Tails wag and owners exchange tales of canine exploits.

A regular on this evening promenade is Mary Peng, one of the city’s most passionate animal rights activists and a pioneer of animal healthcare with the International Center for Veterinary Services (ICVS), which she set up in 2006.

“People in China are completely besotted with their pets. It’s nothing short of amazing. The pet industry is growing 20 per cent a year, which is stunning,” says Peng, who originally hails from New York and who herself owns four cats and one dog.

Many in the dog-walking group have met up using a WeChat social messaging group, with 400 members, and these walks can have up to 70 (human) participants.

Getting to this point has been a hard-won battle. Between 1980 and 1990, there were more than 50,000 fatalities from rabies, nearly all from exposure to dogs.

“China is a rabies-endemic country, and you had generations of people between 1966 and 1993 who didn’t really grow up with dogs,” says Peng. Correcting myths about dogs and public health advocacy is a significant part of her work in China.

Officially there are 2.5 million registered dogs in Beijing, a city of 23 million people, although in reality there is probably nearly double that number.

After the dog ban was lifted in 1993, it cost 5,000 yuan (now the equivalent of €640) to register one’s dog, which was several times the annual income for an average worker.

In 2003, the laws were relaxed slightly but the registration was still a steep 1,000 yuan (€123) a year, plus another 500 yuan a year to renew. There is still a ban within city limits on 41 breeds deemed “big and vicious”, plus a height restriction of 35cm.

Peng is trying to explode the myth that big dogs are inherently vicious – the three most aggressive breeds are all small dogs – but prejudices linger.

There are still 2,000 rabies deaths a year, mostly from dog bites, in China, and in the countryside and second-tier cities, the response is still to cull dogs.

This month there was an online campaign urging the public to poison unleashed dogs, and public concern after news that China’s second largest rabies vaccine maker had breached national drug standards since April 2014.

Events such as the grotesque Yulin dog meat festival and a taste for dog meat in some regions have given China a bad reputation on how it treats animals, but few people, especially the young, eat dog.

Kitty Liu, who is 28 and lives in Guangzhou, owns a pet shop called “To be a famous dog”. She was inspired by her love for her two-year-old Alaskan Malamute.

“Many parents want a dog for their child because they want to train the kid to have more responsibility and patience. Older people own pets because their children are too busy and they need company,” said Liu.

“Lots of dog-owners are young people like me – a single child with no sisters or brothers. Dogs can keep us company, especially singles, who raise their dogs like children,” she says.

Wang Yi owns an export company, and lives in the eastern city of Hangzhou. She is married, doesn’t want children, and has a two-year-old Chihuahua.

“Dogs can keep us company. Our Chihuahua only costs about 100 yuan (€12.75) a month to keep because we don’t take him to the beauty salon and he eats meat when we cook meat. He’s small, so he doesn’t eat much. And he is lovely,” she says.