Emmerson Mnangagwa, known as ‘the Crocodile’, expected to be installed as new leader 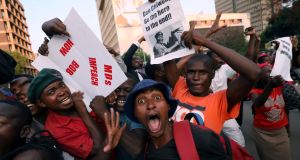 Zimbabwe is expected to move quickly to install a new leader after the resignation of its 93-year-old president Robert Mugabe sparked scenes of jubilation in the southern African country.

Mr Mugabe’s 37-year rule came to an abrupt end after he opted to relinquish power rather than face the impeachment proceedings against him that were begun in parliament on Tuesday by the ruling Zanu-PF party.

The party sacked Mr Mugabe as its leader on Sunday, four days after the army seized control of the country and placed the veteran leader, and his wife Grace, under house arrest.

Emmerson Mnangagwa (75), the vice president whom Mr Mugabe sacked earlier this month for showing “traits of disloyalty”, is expected to be installed as Zimbabwe’s new leader within 48 hours.

Mr Mnangagwa fled Zimbabwe following his dismissal, citing fears for his safety, and Zanu-PF chief whip Lovemore Matuke would not disclose his whereabouts yesterday. But he said Mr Mnangagwa was “not far from here” and would move with speed “to work for the country”.

There are fears that Mr Mnangagwa, a former security chief with a reputation for ruthlessness, will continue the repressive policies that had become a hallmark of the Mugabe regime. 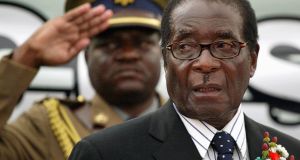 Nicknamed “the Crocodile”, he was a longtime ally of Mr Mugabe’s until their recent falling out and was accused of being instrumental in a crackdown on dissent in the 1980s that led to the deaths of at least 10,000 civilians, an allegation he denies.

Mr Mugabe’s unexpected decision to resign was the catalyst for extraordinary scenes of celebration throughout Zimbabwe. In the capital, Harare, car horns blared, citizens hugged and people cried when news of his resignation broke at about 6.30pm local time.

“I am very happy with what has happened,” said Maria Sabawu, a supporter of the opposition Movement for Democratic Change (MDC), outside the hotel where the impeachment process was happening. “I have suffered a lot at the hands of Mugabe’s government,” she said, showing her hand with a missing finger that she said was lost in violence during a presidential run-off election between Mr Mugabe and opposition leader Morgan Tsvangirai in 2008.

Mr Mugabe’s downfall brings the curtain down on an extraordinary political career. He has led Zimbabwe since a guerrilla struggle ended white-minority rule in the country formerly known as Rhodesia.

But he took the once-rich country to economic ruin and kept his grip on power through repression of opponents, although he styled himself as the Grand Old Man of African politics and retained the admiration of many people across Africa.

Only a week ago he appeared to be fully in control of the country he has ruled since 1980, despite the fact that his party was being torn apart by factionalism linked to the race to succeed him.

His sacking of Mr Mnangagwa was seen as a manoeuvre to clear the way for his 52-year-old wife, known as “Gucci Grace” because of her perceived lavish spending on consumer goods, to succeed him.

But the move backfired as it triggered the military intervention of last Wednesday that brought a swift ending to his near four decades in power.

Theresa May, the prime minister of Zimbabwe’s former colonial power, Britain, said Mr Mugabe’s resignation provided the African country with an opportunity to “forge a new path free of the oppression that characterised his rule”. She said Britain, as “Zimbabwe’s oldest friend”, would do all it could to support the country. – Additional reporting Reuters