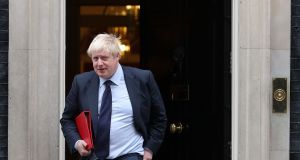 Britain’s foreign secretary, Boris Johnson: Britain will increase its financial offer for the divorce bill if the EU agrees to move on to talks about the future trading relationship. Photograph: Daniel Leal-Olivas/AFP/Getty Images

Downing Street has ruled out a key concession on EU citizens’ rights in Britain after Brexit, insisting that the European Court of Justice (ECJ) can have no role in adjudicating them after a transition period. EU negotiators have told Britain that there must be more progress on citizens’ rights, the divorce bill and Ireland’s concerns over Brexit, for EU leaders to agree next month to move on to talks about a future trade deal with Britain.

The EU wants the ECJ to determine if EU citizens’ rights in Britain are upheld after Brexit and immigration minister Brandon Lewis suggested on Monday that the issue was “part of the negotiations”. The prime minister’s official spokesman said on Tuesday, however, that the ECJ’s role in Britain would be unchanged during a two-year transition period but that “post that period, the jurisdiction of the ECJ will come to an end”.

Senior ministers, including leading Brexiteers Boris Johnson and Michael Gove, agreed on Monday night to increase Britain’s financial offer for the divorce bill but only if the EU agreed at the same time to move on to talks about the future trading relationship. Despite warnings from Dublin and Brussels, the British government insists that there is little scope for further progress on the Border until the shape of the trading relationship between Britain and the EU becomes clear.

MPs on Tuesday continued to scrutinise the European Union (Withdrawal) Bill, with a number of Conservative MPs threatening to rebel against the government over the future role of the EU Charter of Fundamental Rights. The government says the charter should not apply in Britain after Brexit because it could give the ECJ a role in determining if new British laws breached citizens’ rights under the charter.

Justice minister Dominic Raab promised to publish a memo early next month outlining how rights will be protected without the charter.

“All of those substantive laws, principles and rights of which the charter is a reflection of the source will already be converted into domestic law by this bill – so it is not necessary to retain the charter in order to retain such substantive rights,” he said.

But former Conservative attorney general Dominic Grieve urged the government to think again about withdrawing from the charter and called on fellow MPs to take rights more seriously.

“There is a failure at times, perhaps, with some members of this house to actually look at what has been happening to our society and country over a 40-year period. Western democracies on the whole have tried to develop the idea of rights,” he said.

“I know that for some honourable members this is anathema, it makes them choke on their cornflakes. But it’s a development I’ve always welcomed and it offers protection for all members of society.”

Independent Unionist MP Sylvia Hermon said the government’s decision made it more urgent that it should draft a bill of rights for Northern Ireland.

“The UK withdrawing from the Charter of Fundamental Rights will have an impact on the Good Friday Agreement and the perception that half of the community will have in Northern Ireland about respect for human rights,” she said.

1 Open Ireland as soon as possible - Tourism chief warns of 'catastrophic' impact of pandemic
2 Bobby Storey: The IRA's planner and enforcer who stayed in the shadows
3 Who are the new junior ministers? All their profiles are here
4 World, look away now – these are dark days for the United States
5 Full line up of junior ministers unveiled as Taoiseach accused by one TD of snub
Real news has value SUBSCRIBE