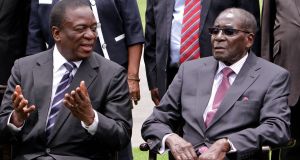 Emmerson Mnangagwa (left), then vice-president of Zimbabwe, with Zimbabwean president Robert Mugabe in December 2014. The two men were side by side as Zimbabwe’s liberation struggle raged in the 1970s. Photograph: Tsvangirayi Mukwazhi/AP

Two days after Emmerson Mnangagwa was sacked as Zimbabwe’s vice-president, he fled the country saying there were “incessant threats” to his life, his political career apparently in tatters.

But a week later, he appears to be in pole position to take over from Robert Mugabe, the veteran Zimbabwean leader who dismissed him. Mnangagwa’s sacking last week was the catalyst for the dramatic decision by the army to seize control of the impoverished southern African nation on Wednesday and confine Mugabe to his house.

Analysts say that one possible scenario is that Mnangagwa, who is thought to be preparing to return to Zimbabwe from his brief spell in exile, will now be restored as vice-president. He could then be sworn in as acting president at a conference of the ruling Zanu-PF party that is scheduled for next month, the analysts say.

Mnangagwa, who had been locked in a bitter succession battle with Grace Mugabe, the president’s wife, is a veteran of Zimbabwe’s liberation and has garnered a reputation as a ruthless operator.

Nicknamed the “Crocodile”, the 75-year-old is close to General Constantino Chiwenga, the army commander, who led the military take over, and he had warned Mugabe that he would challenge the president’s rule shortly after he fled. He accused Mugabe, who has ruled with an iron grip for nearly 40 years, of using the ruling Zanu-PF party as his “personal property”.

It is a battle that pits old liberation comrades against each other.

Mnangagwa was at Mugabe’s side as Zimbabwe’s liberation struggle raged in the 1970s, having acquired his nom de guerre in guerrilla warfare in the previous decade. One friend said he was the only person to survive from a group that bombed a train during white minority rule. The others were caught and executed, but Mnangagwa, then just 16, was spared because he was a minor.

After the country gained independence from Britain in 1980, he became Zimbabwe’s first state security minister and later served as justice minister. Mnangagwa was appointed vice-president in 2014 – replacing Joice Mujuru after she also became locked in a succession battle with Grace Mugabe and was expelled from Zanu-PF.

Some analysts say Mnangagwa became the second most feared Zimbabwean leader after Mugabe.

He was accused of orchestrating the “Gukurahundi” massacre of Zanu-PF’s political opponents in the 1980s, in which thousands of civilians from the Ndebele ethnic group were killed, a claim he has denied. Opposition parties also accused him of helping to organise election-related violence and to rig Zimbabwe’s 2008 poll in Mugabe’s favour.

Friends of Mnangagwa say he should not be blamed solely for such incidents, which were collective cabinet decisions endorsed by Mugabe, the dominant force in Zanu-PF.

“That Gukurahundi thing was dark history,” said Lloyd Msipa, an expert on Zimbabwe and an acquaintance of Mnangagwa. “But Mnangagwa has done more good than harm,” he said, citing his championing of recent agricultural reform and his backing of a move to restore Zimbabwe’s ties with the International Monetary Fund and World Bank.

“This is the man to lead the transition from Mugabe to something else,” he said.

But Tendai Biti, an opposition leader who served as finance minister in a unity government between 2009 and 2013, said it would be wrong if Mnangagwa were anointed as Zanu-PF leader and president.

The military intervention, he said, should be used to open up the political arena, not to settle a factional battle within Zanu-PF.

“People know my views on Mnangagwa,” he said, referring to his alleged human rights abuses and how he stood by an increasingly discredited and irrational Mugabe.

In spite of his chequered past and the dislike for him in parts of the country, particularly among the Ndebele community, western diplomats had viewed Mnangagwa as a senior Zanu-PF leader they could work with in the hope that there would be an orderly transition as Mugabe’s health deteriorated.

Two years ago, Mnangagwa explained his moniker to the Herald, the state newspaper. “You know the trait of a crocodile, don’t you? It never hunts outside water,” he said.

“It always goes into the water to catch its prey. It never goes in the villages or in the bush looking for food. It strikes at the appropriate time.”

The subtext was hard to miss. Mnangagwa was prepared to bide his time to succeed Mugabe, and was waiting for the right moment. – Copyright The Financial Times Limited 2017