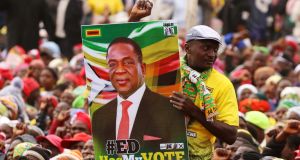 An independent audit of the voters’ roll that will be used in Zimbabwe’s general election this month has found it is more accurate, complete and current than registers used in previous national polls that were disputed.

The Zimbabwe Election Support Network (ZESN) said on Thursday that its review of the newly compiled biometric register of more than 5.6 million voters did not reveal any anomalies that affected a large percentage of the registrants.

“Overall, ZESN finds that the 2018 voters’ roll received on June 18th is an improvement over the 2013 preliminary voters’ roll,” Andrew Makoni, chairman of the independent election watchdog body, said in a statement.

ZESN said the audit involved in-depth field and computer tests to check the accuracy, currency and completeness of the voters’ roll.

The body’s findings appear to contradict the position taken by many opposition parties and civil society groups in recent months in relation to the list of voters produced by the Zimbabwe Electoral Commission (ZEC), the body tasked with overseeing the poll.

In particular, the Movement for Democratic Change Alliance has warned that the new voters’ roll is littered with problems that make it “not fit for purpose” in the July 30th election.

Among other things, the main opposition bloc believes the roll contains hundreds of thousands of “ghost voters” – fake names, duplicates and the names of dead people – registered illegally to swing the election in favour of the ruling Zanu-PF party.

It is believed that manipulation of the voters’ roll has been at the heart of the rigging of elections since 2000 under former president Robert Mugabe, who was forced to stand down last year after 37 years in power.

New president Emmerson Mnangagwa has vowed to break with the past, and promised that this year’s election would be free of the type of violence, intimidation and electoral fraud that plagued earlier polls.

The ZEC has denied the voters’ roll is overly flawed, saying in full-page newspaper advertisements this week in local media that it was “satisfied that the voters who have the same names and dates of birth are unique individuals with unique photographs and fingerprints”.

The ZESN report did raise a red flag around voters and the wards they are registered to vote in. The body said more than 5 per cent (263,998 voters) of all registered voters using the same address were posted to cast their ballots in different wards, which did not make sense.

The ZESN has also expressed concerns about the design and layout of the ballot paper, which appears to give Mr Mnangagwa an advantage; and the ZEC’s decision to change the positions of voting booths, which threatens a voter’s right to secrecy.

Meanwhile, research released on Friday gives Mr Mnangagwa a narrow lead over his main rival for the job, Nelson Chamisa, the leader of the Movement for Democratic Change Alliance.

The Afrobarometer survey asked 2,400 adults across the country who they would prefer as president, and the result shows Mr Mnangagwa got the nod from 40 per cent compared to 37 per cent for Mr Chamisa.

The research company said there was now a “reasonable possibility” the latter could win. In May, Mr Mnangagwa had an 11-point advantage over Mr Chamisa.