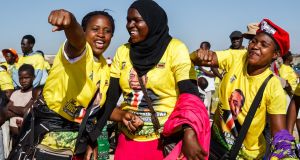 Reports of voter intimidation and threats of violence are on the increase in the final days before Zimbabwe’s first general election since former president Robert Mugabe was ousted in November,

According to Jestina Mukoko of the Zimbabwe Peace Project, an NGO that is monitoring the electoral process across the country, rural communities are being warned by ruling party officials and chiefs that if they vote for the opposition on July 30th, “they will be found out”.

A majority of the 5.6 million people on Zimbabwe’s voters’ roll live in rural areas, where traditional rulers wield enormous influence and for the most part support Zanu-PF, which operates a system of patronage to buy their loyalty.

“Zanu-PF officials are convening meetings in most areas and they are telling people that if they vote for the opposition the violence that was visited upon them during the 2008 general election will come again,” Ms Mukoko told The Irish Times.

Zimbabwe’s disputed general election in 2008 was undermined by widespread violence that left over 170 opposition supporters dead and hundreds more injured, according to human rights groups. Tens of thousands of people were also displaced.

Ms Mukoko’s warning came two days after the United Nations High Commissioner for Human Rights confirmed that threats of violence and coercion – including people being forced to attend political rallies – were increasingly being reported ahead of the election.

But the UN’s human rights body did not say a particular party was behind the intimidation.

The frontrunners in Monday’s presidential election are Zimbabwe’s current president, Emmerson Mnangagwa of Zanu-PF, and his opponent Nelson Chamisa, who leads a group of opposition parties called the Movement for Democratic Change (MDC) Alliance.

Known as “the Crocodile”, the 75-year-old Mr Mnangagwa is a party hardliner who fought in the war of independence against colonial rule in the 1970s. Mr Chamisa rose to lead the MDC Alliance after the death of the party’s founder, Morgan Tsvangirai, in February.

There are 23 presidential candidates in all, while a total of 55 political parties are contesting the parliamentary poll.

Mr Mnangagwa has repeatedly promised the election will be free and fair since succeeding the 94-year-old Mr Mugabe, who was forced to stand down by Zanu-PF after a military takeover brought the country to a standstill.

On Friday, Mr Mnangagwa told the leaders of Brazil, Russia, India, China, and South Africa (Brics) at an economic summit in Johannesburg that all measures had been put in place to support a credible poll.

However, tensions between the MDC Alliance and Zanu-PF have increased over the past few days over fears that the ruling party is going to rig the outcome of the vote again, especially in urban areas, which traditionally are opposition strongholds.

Despite growing tensions between the political parties, the atmosphere on the streets of Harare was much more relaxed on Friday than in previous elections. Small opposition parties were freely holding their last election rallies before going to the polls, unhindered by the authorities.