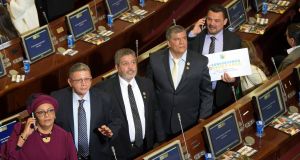 Half a century after their Marxist comrades took up arms in the Colombian mountains and vowed to overthrow the state, members of the country’s once-feared guerrilla group, the Farc, have taken seats in the democratically elected Congress for the first time.

A handful of senior figures from the Farc, now a political party, walked into the parliament building in central Bogotá on Friday to be sworn into office in a ceremony rich in symbolism.

Among them was Pablo Catatumbo, a 65-year-old veteran who fought with the Farc for more than 40 years before helping negotiate their 2016 peace deal with the government. He and his colleagues, who carried red roses – the Farc’s symbol – into parliament, took their seats opposite staunch conservatives who have spent their lives trying to destroy the guerrilla group.

“Today we are witnesses of a true milestone in our history,” President Juan Manuel Santos said in his last speech to Congress before stepping down after eight years in power.

The Farc members did not win their 10 seats – five in the senate and five in the lower house; they were given to them under the terms of the peace deal. They will hold them for eight years but after that they will have to win seats on merit.

The decision to give them a platform in Congress was one of the most controversial parts of the peace deal, with some conservatives saying it was tantamount to rewarding terrorists.

Mr Santos’s successor, president-elect Iván Duque, has described the decision as “a joke” but has stopped short of saying he will try to strip the guerrillas-turned-politicians of their seats.

For all the controversy, the Farc will have little clout. In March’s congressional elections it took just 0.3 per cent of the national vote.

Instead, the new Congress will be dominated by parties from the right and centre-right, spearheaded by Alvaro Uribe, who waged a fierce war against the Farc as president from 2002-2010, led opposition to the peace deal, and threw his weight behind Mr Duque’s presidential bid.

As Mr Duque prepares to take office on August 7th, the peace deal he inherits is under severe strain. The Farc says the government has broken its promises and one of its senior leaders, Iván Márquez, refused to take up his seat in the Senate, arguing in a recent letter that “Colombia’s peace is trapped in nets of treason”.

Another Farc leader, Jesús Santrich, could not enter Congress because he is in jail, awaiting extradition to the US on drug-trafficking charges.

Since the peace deal was signed, more than 300 community leaders, trade unionists and human rights activists have been assassinated in Colombia. The killings have been blamed on the vestiges of right-wing paramilitary groups that largely disarmed a decade ago.

A shadowy far-right group called the Black Eagles warned earlier this month that it would continue to assassinate what it described as “guerrillas in disguise”. The threat was sent to community leaders, journalists and left-wing members of congress.

With the security situation apparently worsening, the US embassy in Bogotá recently tightened its travel advice to its citizens, warning them against travel to some of the worst-hit areas and urging them to “exercise increased caution in Colombia due to crime and terrorism”.

Mr Duque (42) has in recent days been naming his cabinet, opting for a mix of young technocrats and old hands, some of whom are close to Mr Uribe. His most controversial appointment was Guillermo Botero as minister of defence. The 70-year-old hardliner and staunch critic of the peace deal has little experience of defence issues, having worked for the national retailers’ federation for the past 15 years.

Alberto Carrasquilla was named finance minister. He held the same post for four years under Mr Uribe and has experience at the central bank and the Inter-American Development Bank.

Carlos Holmes, a former mayor of Cali, will be foreign minister. He will have to deal with the unfolding crisis in neighbouring Venezuela, which promises to be one of the big challenges for the Duque administration. – Copyright The Financial Times Limited 2018