Imran Khan’s long-awaited victory has come at a cost

Analysis: Poised to assume power, the question is whether Pakistan’s prime minister-elect will have the authority to lead

Imran Khan was on track to become Pakistan’s new prime minister on Thursday, in an election that has been clouded with accusations of vote-rigging. Video: Reuters 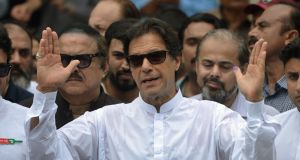 Imran Khan after casting his vote in the general election, in Islamabad, on Wednesday. As prime minister his top challenges will be to strengthen institutions and stamp out corruption. Photograph: Aamir Qureshi/AFP/Getty Images

Imran Khan doesn’t do self doubt. When the former cricketer claimed victory in Pakistan’s election in a live address to the nation, he appeared typically self-assured, more than ready for his long-awaited rendezvous with history. The controversial poll, he said, was the “cleanest” and “fairest” the country had ever held.

After an election dubbed the dirtiest in years, it was a startling claim. But, if there’s one skill that Khan seems to have mastered in life, it’s the art of positive visualisation. Believe it and it shall be so. His 2011 autobiography, which charts a stellar sporting career that culminated in Pakistan’s against-all-odds 1992 World Cup win and his early struggles as a political outsider, is chock full of anecdotes about believing in the impossible.

And it’s an approach that seems to have worked. To a point.

For if Khan, leader of the Pakistan Tehreek-e-Insaf (PTI) party, has finally won the battle of his life, it has come at a cost. This election – Khan’s fourth bid for office – saw the single-minded politician adopt a hard-headed realism in his bid to break the stranglehold of the country’s Bhutto and Sharif dynasties. By default or design, he was the military’s favourite candidate. The notion that he may have have been swept along by the hidden currents of the country’s deep state cast a shadow over his win.

The election was lopsided from the get-go, set against the backdrop of an ongoing corruption crackdown on the Sharifs’ Pakistan Muslim League-Nawaz (PML-N), which included the jailing of ousted prime minister Nawaz Sharif on the back of revelations from the 2016 Panama Papers leak. For Khan, the timing was fortuitous. Critics railed against attempts to silence media voices and the mass defection of candidates from PML-N to PTI, allegedly engineered by intelligence agents.

The recruitment of these so-called “electables”, party-hopping politicians with large vote banks, is a tactic that might have stuck in Khan’s craw in years gone by, when the pro-democracy crusader had a higher-minded, some might say naive, approach to contesting elections. Khan’s defence of the country’s controversial blasphemy laws served as a further enticement to these political mercenaries. It was a move that displeased elements of the party’s old guard, who were shunted aside to clear seats for the newcomers, according to PTI insiders.

Politics in Pakistan is a treacherous affair in which only the ruthless prosper. Once Khan grasped this, it seems he never looked back. But to attribute his success purely to shady deep state tampering would be disingenuous. Critics’ defence of Sharif, a man who was enriched and elevated to power under the military dictatorship of Zia ul-Haq in the 1980s, certainly no stranger to dirty politics himself, failed to resonate with voters eager to try something new. Khan, at least, was untested. And, so far, untainted.

“The army definitely supported Khan in some way or another, but that doesn’t mean he didn’t enjoy popular support,” says Mazhar Abbas, a former AFP bureau chief, now with Geo TV. “One of the positives of Khan is that he really brought out those people who normally don’t vote in elections, the women and young people. There are now a lot of expectations on him.”

Poised to assume power, the question is whether Khan, whose PTI party fell short of a majority and is likely to call upon independents to make up numbers, will have the authority to lead. His top challenges will be to strengthen institutions and stamp out corruption, two endeavours that may bring him into a head-on collision with the fickle, self-interested electables in his own ranks, a group that includes landlords used to calling the shots in their rural power-bases.

With the economy on the verge of crashing, Khan should soon be knocking on the doors of the International Monetary Fund. Azeema Cheema, a political analyst, believes his victory speech, which struck a moderate note on relations with the US and India, was the first step in inspiring the confidence of the international community. “The economy comes first and foremost. He will have to do some lobbying to make himself credible and that will be connected to the foreign policy decisions he will take.”

Relations with the US could also be tricky

It is precisely on foreign policy that Khan could clash with the military, whose popularity in the country is largely derived from depicting India as an existential threat. If Sharif fell out with the generals, it was because he was seen as being too cosy with India, challenging the military’s alleged backing of Islamist militants in Indian-held Kashmir and Afghanistan.

Playing the populist card, Khan accused the West of maligning Pakistan’s army to strengthen India during his campaign, but in the aftermath of victory, he spoke of moving away from “the blame game” that has blighted the two nuclear-powered nations since partition.

Relations with the US could also be tricky. In his first tweet of 2018, Donald Trump blasted Pakistan for its “lies & deceit”, accusing the country of playing a double game on terrorism. This year, the US withheld $255 million (€220 million) in aid from Pakistan. Khan is fiercely opposed to the war on terror, claiming that 70,000 lives have been lost fighting a US war that has led to an upsurge in militancy. With Khan in office, relations between the two countries may require a reset.

Diplomats will be watching closely to see if Khan will be able to wrest defence and foreign policy from the generals. Kamal Alam, a Pakistan expert at the Royal United Services Institute, a London-based think-tank, doubts that Khan will accept being dictated to by the army. “Apart from him, nobody else in Pakistan really understands international affairs,” he says. “He understands the Americans and the Brits.”

No amount of positive visualisation can change the grimy realities of Pakistani politics. Nor, indeed, the circumstances in which Khan won power. But the nation is counting on his willpower to achieve the vision of strong institutions and social justice that captured the nation’s imagination. Looking at Pakistan’s bloody history, at successive coups interspersed with periods of dynastic rule in which looting the country became the norm, Khan’s arrival could signal a new era.

As one party activist in Lahore told The Irish Times, the hope is that Pakistan’s prime minister-elect will create a country where nobody needs the military and the electables to win power. An impossible dream? Time will tell.