Australian government in crisis as deputy PM quits over affair

Sexual harrassment complaint ‘the straw that broke the camel’s back’, says Barnaby Joyce

Australian deputy prime minister Barnaby Joyce, a practising Catholic, has been married for 24 years and has campaigned on family values. He said he decided to quit after an allegation of sexual harassment emerged on Friday. 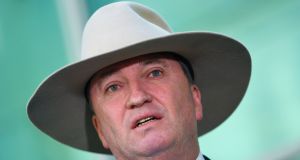 The Australian government was in disarray on Friday night, with prime minister Malcolm Turnbull out of the country and deputy prime minister Barnaby Joyce resigning following an affair with a now pregnant staff member and allegations of sexual harassment.

When the story of Mr Joyce’s affair with his former media adviser, Vikki Campion, broke on February 7th, he initially seemed to have the support of his National Party colleagues. But every day brought a new story, mostly in the Daily Telegraph tabloid – where Ms Campion had previously been a reporter.

Eight days after the initial story broke, Mr Turnbull announced that Mr Joyce would be taking a week of leave, and would not be acting prime minister while he was away. Mr Turnbull also announced a ban on sex between ministers and their staff and launched an extraordinary attack on Mr Joyce’s relationship – calling it “a shocking error” that unleashed “a world of woe”.

Mr Joyce responded by calling Mr Turnbull “inept”, but his grip on his own party started to unravel.

Firstly the Western Australian branch of the Nationals called on Mr Joyce to resign, which was then followed by two MPs doing likewise.

On Thursday night the National Party’s head office confirmed a sexual harassment complaint had been made against Mr Joyce by a Western Australia woman.

Mr Joyce initially dismissed the complaint as “spurious and defamatory”, but on Friday afternoon he told a press conference he could not continue as leader while it was being investigated.

He said he faced a “litany of allegations” but the sexual harassment complaint was “the straw that broke the camel’s back”.

Mr Joyce said his resignation should be a “circuit breaker” for the parliament, “for Vikki, for my unborn child, my daughters, and for [my wife] Nat”.

“This has got to stop. It’s not fair on them. It’s just completely and utterly unwarranted, the sort of observation that’s happened.”

Reports suggest Mr Joyce did not call Mr Turnbull before announcing his resignation, with Mr Joyce saying only that he had informed the acting prime minister, Mathias Cormann.

In a later statement, Mr Turnbull thanked Mr Joyce for his service.