UN envoy calls on Zimbabwe to stop abuse of protesters 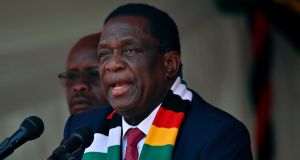 Zimbabwe’s president Emmerson Mnangagwa: Despite his promises to end the authoritarian approach to governance, the army and police have cracked down on protesters. Photograph: Tony Karumba/ AFP

A United Nations envoy who has been assessing the human rights situation in Zimbabwe has called on the government to stop the abuse of citizens protesting against the ruling party and its handling of the economy.

Concluding his official 10-day visit on Friday, the UN’s special rapporteur on the rights to freedom of peaceful assembly and of association, Clement Voule urged the Zanu-PF-led government to adopt a human rights approach to policing protests.

He also called on President Emmerson Mnangagwa’s regime to establish an independent mechanism to investigate members of the security forces accused of human rights abuses by citizens involved in protests that have erupted across the country this year.

“I have received a considerable number of allegations related to arrests, detentions and even abductions of trade union leaders and members in connection with their activities,” he told reporters in Harare, where he outlined his preliminary findings.

He added: “I was shocked by the testimonies of victims who alleged they had been raped and sexually assaulted by military and police elements in the context of the protests. The victims of these crimes explained they were assaulted in their homes, in many cases at night.”

When Mr Mnangagwa became president in August 2018, he promised to dispense with the authoritarian approach to governance favoured by his predecessor, the recently deceased Robert Mugabe.

However, since then the army and police have viciously cracked down on unions, civil society groups and opposition parties involved in protests.

In January an army unit was deployed to help police handle nationwide strikes and up to a dozen protesters were shot dead by soldiers, while numerous protests have also been broken up by heavy-handed riot police in the months since then.

Mr Voule’s visit to Zimbabwe coincided with hundreds of doctors and nurses holding vigils and protests to call attention to the disappearance of Peter Magombeyi, the acting president of the Zimbabwe Hospital Doctors Association.

Dr Magombeyi was abducted a few days after he led a protest on September 3rd in Harare seeking better pay and working conditions for union members.

The 27-year-old was released by his captors last week in Harare and has since gone to South Africa to receive medical treatment for injuries he received while being detained.

“This [Magombeyi’s abduction] is not an isolated case,” said Mr Voule, who added that union leaders he interviewed said they were living in a “toxic environment of constant retaliation and fear”..

Mr Mnangagwa’s critics says the security forces’ handling of protests shows the president has little appetite to follow through on his promise to adopt human rights reforms. However, his supporters say he is being undermined by elements of Zanu-PF who want him removed from power.

One of the key recommendations made by Mr Voule was to bring Zimbabwe’s new public order laws into line with international standards on human rights.

Critics of the new Maintenance of Peace and Order Bill claim it is identical – and even worse in some parts – to the oppressive Public Order and Security Act it is meant to replace.